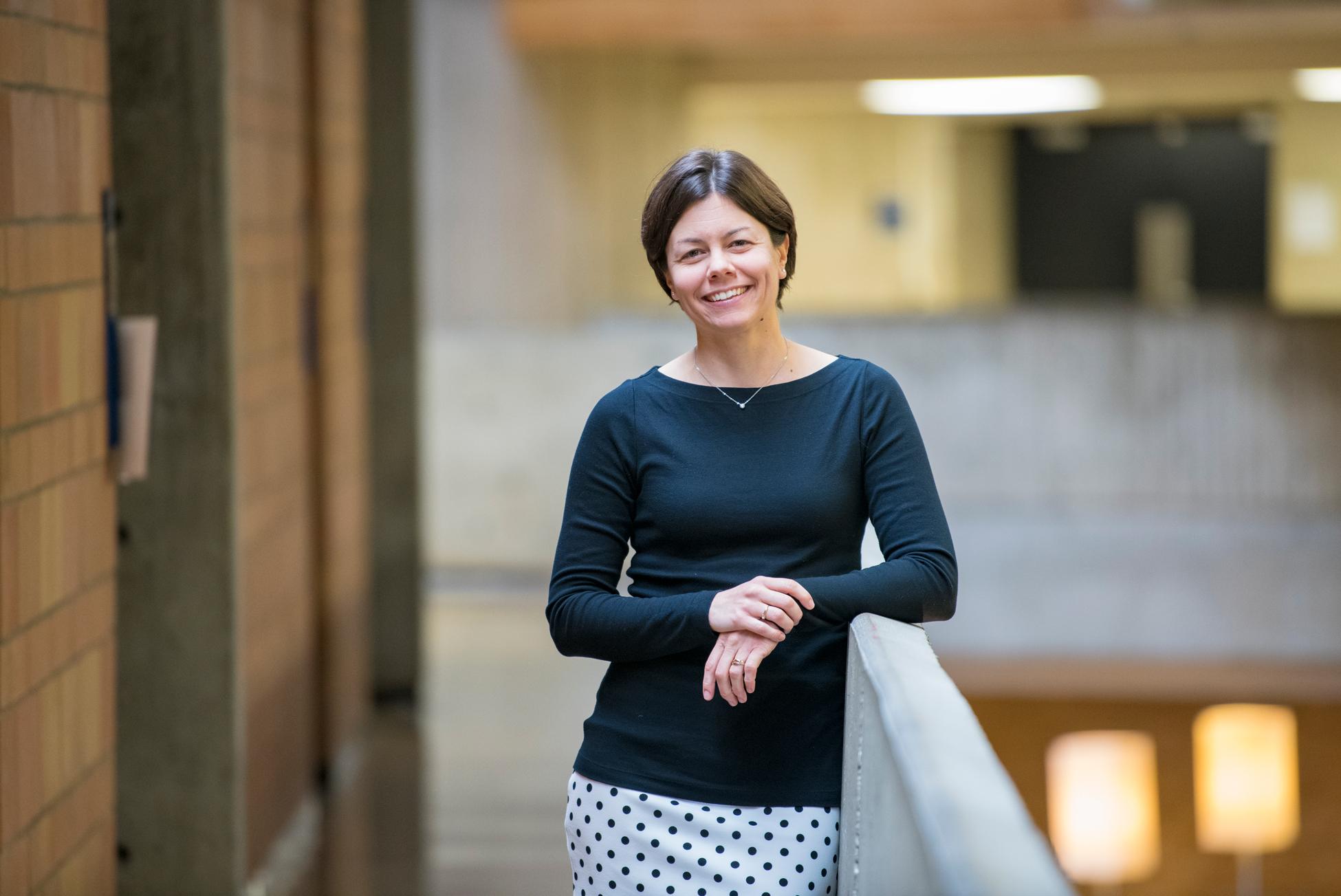 Katherine Larson, an expert in 16th- and 17th- century English literature, has been named to the Royal Society of Canada’s College of New Scholars, Artists and Scientists. (photo by Don Campbell)
Article Date
Tuesday, September 11, 2018

As a young child, Katherine Larson knew music and literature would play an important role in her life.

“I was always surrounded by wonderful books and wonderful music growing up,” says Larson, an associate professor and chair of the Department of English at U of T Scarborough.

“My parents encouraged a love of reading and singing, and both of my grandmothers were musicians, so I was exposed to literature and music and the synergy between the two from an early age.”

She would eventually transform those early passions into a career as an English professor, but music was never really far behind, continuing to inspire large aspects of her work. Today, she joins an elite company of scholars in being named to the Royal Society of Canada’s College of New Scholars, Artists and Scientists.

“It’s a tremendous honour,” says Larson, who joins six other U of T faculty – and 52 across Canada – in being named to the College.

Founded in 2014, the College is a handpicked selection of top mid-career scholars and artists in Canada. Members have already received recognition for excellence and serve as ambassadors for their fields.

“To be recognized among an elite group of scholars and artists who are pursuing cutting-edge work is truly exciting,” says Larson, who is an expert in 16th- and 17th- century English literature with interests in early modern women’s writing, gender and language, and music, especially song.

Despite it being a very restrictive time for women in England, Larson says there was a wide range of texts being written, from science fiction, household dramas, philosophical and political writings, to more practical works like breastfeeding and gardening manuals, just to name a few.

“It’s an incredibly rich archive. Adding women’s voices to the conversation changes the whole texture of the literary and historical landscape of that period,” says Larson, a former Rhodes Scholar who also has a Bachelor of Music degree.

Larson says it’s exciting to be part of a vibrant field of study, one that began to emerge about 30 years ago or so and continues to discover new materials. She traces her interest in the field back to her honours undergraduate project, which was a feminist reading of Paradise Lost.

“I had a brilliant teacher and mentor as an undergrad, Rich DuRocher, who passed away several years ago. It was because of him that I became inspired by this time period,” she says.

“There are many examples of women from this period who were very prolific and determined to write despite the obstacles they faced. They were also using their texts in quite radical ways to comment on a range of social topics in ways that continue to resonate today.”

Her latest book, Texts in and of the Air: The Matter of Song in Early Modern England, scheduled to be published with Oxford next summer, explores women’s engagement with song - a topic Larson says has been surprisingly absent from the study of early modern women’s literature. As a companion to the book, Larson (who is a trained soprano) recorded 14 songs from the period that she sang accompanied by a professional lutenist.

“This project was unlike anything I’ve done before,” says Larson, who has sung in a number of chamber choirs in Toronto.

“It’s one that engages deeply with my performance background. It started with this question of how song functioned in early modern culture, but it also moves beyond just looking at lyric texts to explore the performance aspects of song and the musical role it played.”

For her next project, Larson is collaborating with another literature scholar and a musicologist to launch a digital platform called Early Modern Songscapes. The project, which is hosted by the UTSC Library’s Digital Scholarship Unit and is scheduled to launch this winter, will be a hub for those in different disciplines working on music from the period.

“This will have an important educational outreach component because it will be live and open to the public. We’re hoping it will engage scholars, teachers, students and performers.”