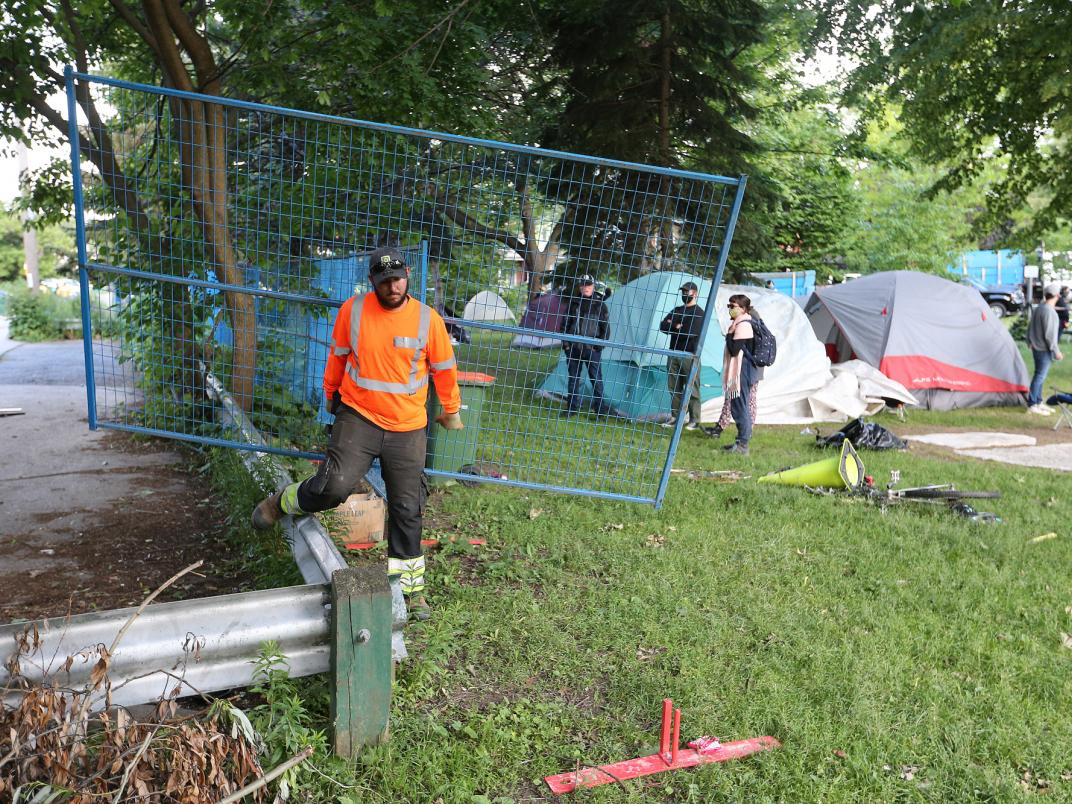 Last week a landmark report on homeless encampments across Canada was released by the federal housing advocate, the office responsible for protecting citizen rights to housing.

The report, which included a series of case studies on seven cities, argues there is a human rights crisis unfolding across Canada in how unhoused people are being treated by governments.

The authors outlined five key recommendations for what governments must do a better. Among them is to immediately stop policing encampments, start providing basic services to camp residents, and engage camp residents.

“Police enforcement of encampments is inappropriate and it immediately increases suffering among people experiencing homelessness,” says Joe Hermer, a professor in the department of sociology at U of T Scarborough and an author of one of the case studies that focused on Prince George, B.C.

Don Campbell spoke to Hermer about what municipalities can and should be doing better in addressing the issue.

How do municipalities generally deal with homeless encampments?

They do a couple of things. Usually there's an increase in municipal bylaw enforcement, so they use bylaw officers to ticket people inside and outside these camps. Often this leads to partial or full evictions. Secondly, municipalities will try various ways to make the encampment as unsustainable as possible. This can include failing to provide basic needs such as water, sanitation, energy, garbage removal and so on. Failing to provide these basics, as it mentions in the report, is a violation of international human rights law.

Why has there been an increase in homeless encampments across Canada?

Homeless encampments are nothing new, but there has been an increase in people sheltering outside in groups or larger encampments. This is due to a lack of affordable and social housing, but also an increasingly fragile safety net, which is failing the most vulnerable people in our society.

Encampments are survival spaces for those who must live in public spaces. We are also in the middle of an overdose crisis, and research tells us that unstable housing increases overdose deaths

How did the City of Prince George deal with the Moccasin Flats encampment?

The city was very heavy-handed in its approach and unlawfully demolished much of the camp, destroying shelters, personally belongings, and displacing a number of people back on to the street. The city ended up apologizing for this demolition, and the court sided with the encampment residents and issued an order that protected it from city interference.

Is what happened in Prince George symptomatic of what’s happening in municipalities across Canada?

What happened in Prince George was a particularly severe example of what goes on in many cities across Canada, which is eviction by force. The default position in many cities is to view encampments as a threat in need of policing, and it’s unacceptable. It’s also happening in small and medium-sized cities and towns.

But I think what happened in Prince George offers an important lesson for other municipalities in that it’s not good enough to say you have a certain number of beds available. Those beds must also be accessible to vulnerable populations, and that includes Indigenous People who have suffered the negative impacts of colonisation.

What should municipalities be doing instead of forcibly removing people?

The best approach is to have a long-term, sustainable strategy for well serviced transitional shelters and social housing. And the processes of getting people into these services and housing must be humane and dignified.

The biggest resource municipalities have in handling encampments are the residents themselves. They should go out and talk to them, listen to their needs, ask them why they are there and see what can be done. Some municipalities do this to a certain degree while others don’t. Prince George up until a few weeks ago absolutely refused to talk to the camp residents.

The way to carry this out is through outreach workers or peer advocates. These are individuals who have lived experience of drug use, for example, or lived experience of being unhoused. You want peer workers to be able to build relationships with camp residents so that once adequate housing is available there’s a level of trust. People who have lived a long time on the streets have often been victimized or had horrible experiences with government, state institutions or the police. They will not use those facilities if there’s not a level of trust that they’re not going to be harmed. That’s particularly true for Indigenous People given the history of colonization and the presence of intergenerational trauma.

How would you rate Toronto’s handling of homeless encampments?

The City of Toronto’s response has been very disappointing from a human rights perspective. They have also followed a heavy enforcement approach, which I wrote about for the Lamport Stadium eviction last year. Social and affordable housing has been such a horribly neglected issue for the last few decades and it’s going to take some time to sort out.

What role can the federal government play in how we deal with this issue?

It can set an example to municipalities on how to treat people when there is an encampment on federal land. They can take a human rights approach where they provided basic necessities such as water and bathrooms and actually engaged residents.