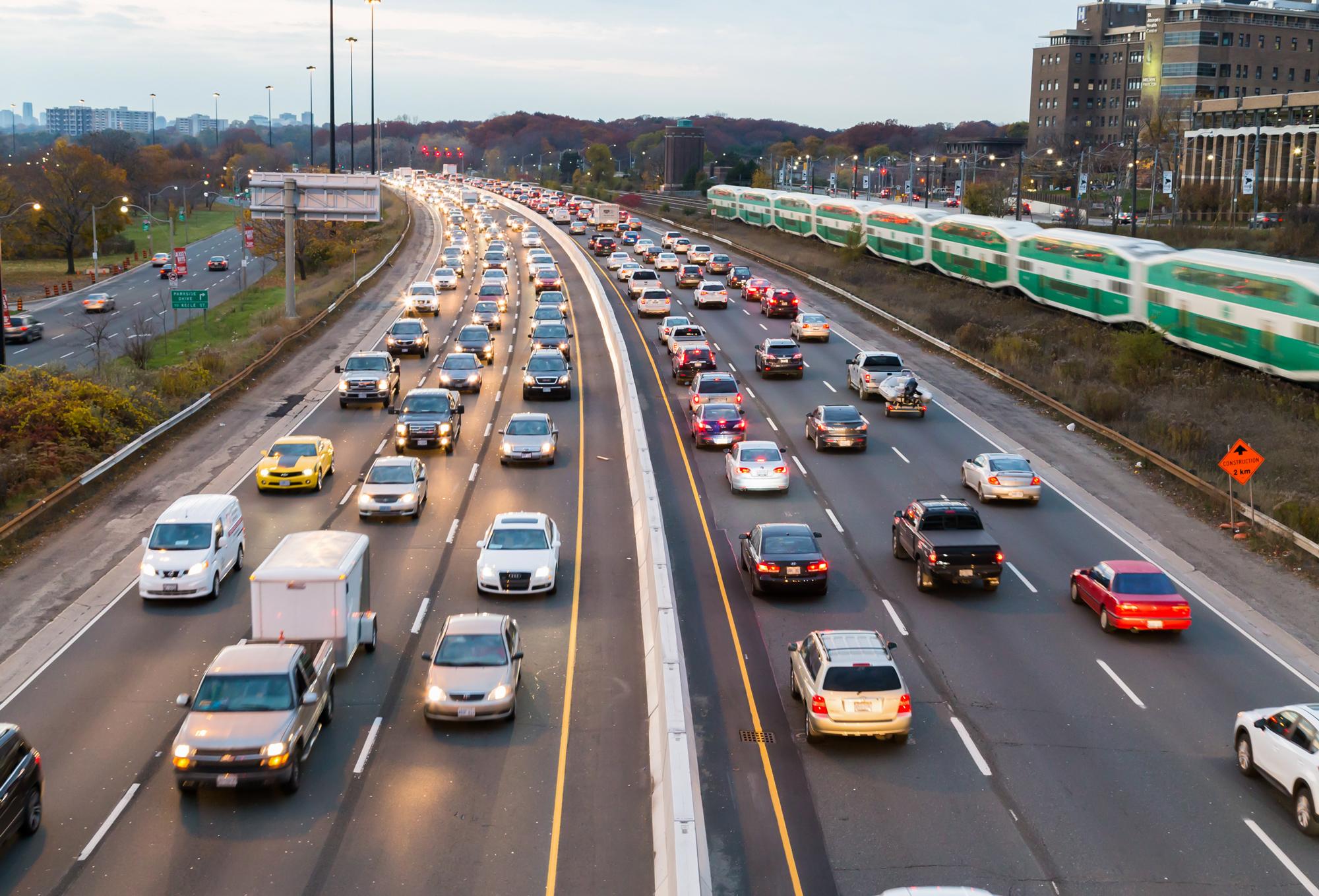 A new U of T Scarborough study finds that road traffic is linked to higher levels of nearby water pollution (iStock Image)
Article Date
Monday, March 14, 2022

Heavy traffic is often associated with air pollution. But a new U of T Scarborough study suggests it’s also a major contributor to water pollution.

The study found that chemicals commonly used in vehicle fluids, tires and paints were much higher in rivers next to roads with heavy traffic.

“We found a strong relationship between traffic and the concentration of these chemicals,” says Tife Awonaike, a recent PhD graduate from the department of physical and environmental science, and lead author of study.

“These roads also appear to be a major source of a surprisingly wide array of contaminants.”

For the study, a series of samples were collected in the watersheds fed by Mimico Creek (which runs through Brampton, Mississauga and Toronto) and Little Rouge Creek (which runs through Whitchurch-Stoufville, Markham, and Scarborough). The samples taken from Mimico Creek, which is located next to roads with heavier traffic, had higher levels for most of the detected contaminants.

Many of the 35 different contaminants that were found in the watersheds are from chemicals used in oils, lubricants, windshield de-icing fluids, tires, paints, coatings and vehicle furniture. They end up in nearby watersheds because when they are emitted onto road surfaces they can get washed into nearby streams when it rains, either on their own or while attached to road dust.

Urban waters in general are not in good shape. They’re really a soup of a whole slew of contaminants.

The researchers found that these contaminants are transported to watersheds in similar ways, suggesting they come from a single, predominant source, namely road surfaces.

These are not contaminants we want in our water, say the researchers. For example, organophosphate esters, commonly added to materials as flame retardants, have been found to be toxic to aquatic organisms. Triphenyl phosphate, which is a type of organophosphate used in electronic equipment, vehicle interiors and upholstery, has been linked to neurotoxicity in fish.

Professor Frank Wania, who co-authored the study, says these contaminants contribute to what’s known as the “urban stream syndrome,” whereby rivers and watersheds are polluted from urban stormwater run-off.

“Urban waters in general are not in good shape. They’re really a soup of a whole slew of contaminants,” says Wania, an environmental chemist whose research looks at how different organic chemicals end up in the environment.

He says even though they analyzed many chemicals as part of the study, it’s probably “only a fraction” of what’s in the water.

“Let’s put it this way — places like the Mimico Creek are not very healthy bodies of water, and it would be very difficult for a healthy aquatic ecosystem to exist there.”

The study, which is published in the journal Environmental Research Letters, received funding the Natural Sciences and Engineering Research Council of Canada.

What can be done?

Switching to electric vehicles won’t be enough. While some contaminants are directly related to burning fossil fuels, others found in paints, coatings, tire particles and de-icing fluids are also used in electric vehicles.

Tife Awonaike is recent PhD graduate from the department of physical and environmental science and lead author of study. (Submitted Photo)

Awonaike says many of the contaminants used to manufacture vehicles can only be controlled on a larger scale by regulatory agencies and governments. Regular street sweeping can help by collecting road dust before it gets flushed into water ways.

On an individual level, there are some activities that can help.

“Regular maintenance of your vehicle is important. You can make sure to fix a leaky car or flaking paint chips,” she says.

“You can also raise awareness about this issue. We don’t want these contaminants ending up in our water where they can do quite a bit of damage to aquatic ecosystems.”