The divine secrets of emotional intelligence 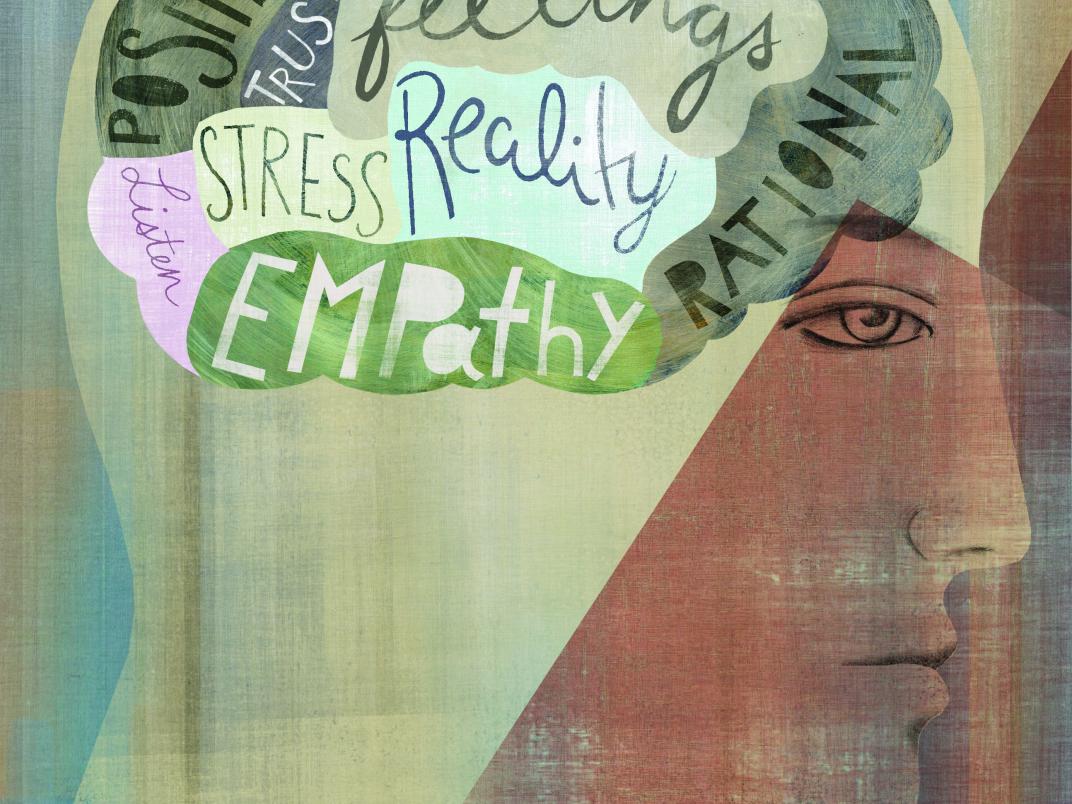 Steven Stein has helped millions harness the power of their emotions. He can help you, too. (Illustration by Sandra Dionisi)

No one would deny that Dr. Steven Stein (BSc, 1972) is a very intelligent man. A clinical psychologist, the CEO of a very profitable company and an expert on psychological assessment, Stein is also a best-selling author and a very busy public speaker. He has helped corporations like Air Canada, American Express and Coca Cola unleash the potential of their workforce, and he has consulted for the Canadian Armed Forces, the FBI and the Pentagon. Oh, and he plays a bang-up saxophone, too.

Steven Stein seems to personify “traditional” intelligence; his IQ is likely very high. But over the past 20 years, psychologists have found that intelligence can take a number of surprisingly different forms, and Stein is pretty smart in other ways as well. His area of expertise—on which he writes books, speaks to audiences and consults for spy agencies—is emotional intelligence, or EQ.

“Emotional intelligence determines your ability to listen to someone else, to assert yourself to someone else, to know how you’re feeling, and to really understand how your emotions influence the way you deal with people,” explains Stein. “It’s the mediating factor in our daily lives.”

In other words, EQ is a measure of our emotional literacy, a gauge on our ability to recognize and express our emotions, regulate those emotions and use them for good (or, in the case of sociopaths, for ill). EQ provides a much-needed balm to our culture’s inordinate obsession with IQ— call it the sensitive yin to our rational yang.

The exciting implication of EQ, according to Stein and other experts, is that those of us who aren’t particularly “book-smart” may still, in fact, be geniuses—or have the potential to become one. “Emotional intelligence isn’t just one thing; it’s 15 different areas,” notes Stein. “Some people, like Steve Jobs, excelled in some areas but not others.”

What if you excel in almost all of them? “You’d be Bill Clinton,” he says, “or Barack Obama.”

Curious to find out where I fall on the scale between a cultural revolutionary like Jobs and a political mastermind like Clinton, I asked Stein to test my emotional intelligence. An hour later, a link to an online EQ test arrived in my inbox. A week later, I worked up the courage to click on it.

Steven Stein discovered his passion for psychology in the early 1970s as an undergraduate student at the University of Toronto Scarborough. He took courses from professors like Abraham Ross, an expert on the bystander effect (why people are usually reluctant to help a stranger in need), and Karen Dion, who at the time was analyzing the effects of physical attractiveness on human behaviour.

“These were interesting questions,” says Stein. “Why do people behave in certain ways? And can we manipulate or change those behaviours for the better?”

He started out in the hard sciences, but his experiences at UTSC eventually led him to earn a doctorate in clinical psychology from the University of Ottawa. A few years later, realizing before anyone else that computing technology had the potential to revolutionize psychological practice, Stein founded Multi-Health Systems Inc. (MHS) with his wife, Rodeen, in the basement office of their Toronto home. MHS quickly grew into a leading publisher of computerized psychological assessments—standardized tests that psychologists use to evaluate and diagnose patients.

But it wasn’t until the summer of 1994, when he travelled to Israel to deliver a lecture, that he would stumble upon the field of psychology that would dominate his life—and enrich it beyond his expectations.

MHS had already published many of the most widely used assessments in psychology—tests targeting all sorts of troubling disorders, from attention deficit hyperactivity disorder (ADHD) and children’s depression to schizophrenia and psychopathology. But having spent more than 10 years publishing assessments of so-called abnormal human behaviours, Stein felt that MHS needed to evolve.

“We wanted to start publishing on the more positive sides of behaviour as well,” he says. “We wanted to explore what makes people really excel and do well in business, at work or at home.”

As if on cue, after his lecture he was approached by Dr. Reuven Bar-On, a clinical psychologist. Bar-On had developed a way to test an individual’s emotional intelligence quotient, or EQ. At the time, few in psychology had heard of EQ. For more than a century, IQ, or intelligence quotient, tests had been the standard method of assessing intelligence. Bar-On’s EQ-i test had been rejected, if not ridiculed, by every major American test publisher.

Bar-On asked Stein if he would publish the test. Employing the same combination of vision and luck that MHS was founded on, Stein agreed.

Then, less than a year later, the world of popular psychology was set alight by another psychologist, Dr. Daniel Goleman, who is also a science writer for The New York Times. His book—Emotional Intelligence: Why It Can Matter More than IQ—was hailed by its publisher as “the groundbreaking book that redefines what it means to be smart.”

It took readers on a fascinating romp to the very limits of neuroscience in an attempt to elucidate the inner workings of our “second mind”—the emotional flip side to our rational brain. Fuelling this journey was an implicit, eternal question: Why do seemingly smart people do dumb things? Time put the topic on its cover, Goleman’s book appeared on bestseller lists around the world, and the fledgling field of emotional intelligence was thrust onto the airwaves and front pages of the popular consciousness.

“Goleman sold five million copies,” says Stein with a laugh. “It’s the best-selling book in the history of psychology.” Almost overnight, thousands of psychologists, reporters and everyday people wanted to know how to measure EQ. Stein was sitting pretty; MHS was the only company on the planet capable of doing so.

Central to Goleman’s book was a monograph co-published five years earlier by Peter Salovey of Yale University and John D. Mayer of the University of New Hampshire. Entitled simply Emotional Intelligence, their dissertation laid out a framework for a new way of looking at human smarts, inspired not by the intricate workings of our rational minds, but by the ephemeral, yet adaptive, mechanisms underlying our emotional states. The founding fathers of EQ, Salovey and Mayer open their classic paper with a good question: “Is ‘emotional intelligence’ a contradiction in terms?”

Conventional wisdom holds that emotions can betray us, they can lead us astray as we negotiate life’s twists and turns, and they are not to be trusted. The best decisions, we are told, are the ones informed solely by logic, rational thought and strategic planning. As Goleman points out, this bias towards rationality, to the detriment of emotional considerations, is built into the very definition of our species: Homo sapiens, or the “thinking species.”

But we all know that rational abilities offer no guarantee of success and happiness in life. Stockbrokers, marketers, artists and designers have long known—and proven—that no matter how much lip service we pay to rational thought, more often than not it is emotion that guides our behaviour. As Goleman writes, “A view of human nature that ignores the power of emotions is sadly short-sighted.”

According to Stein, who has written three popular books on the subject—The EQ Edge, Make Your Workplace Great and the splendidly titled Emotional Intelligence for Dummies—a high EQ may get you closer to personal and professional fulfillment than a high IQ ever could.

MHS measures emotional intelligence in two ways: through performance measures such as the MSCEIT (Mayer-Salovey-Caruso Emotional Intelligence Test), and personality measures like the EQ-i 2.0. The latter, which is the one I took, deconstructs the subject’s personality into five composites—self-perception, self-expression, interpersonal, decision making and stress management. These composites are broken down further into 15 sub-composites, which include assertiveness, empathy and impulse control.

But don’t let the formal acronyms MSCEIT and EQ-i 2.0 fool you. At heart, Steven Stein is most driven to apply the teachings of EQ to the average person’s life, and especially to organizational environments where positive social interactions are critical.

“Everything we do at MHS is for the good of people,” he says. “We want to help you enhance and develop yourself, to help you perform better in the world.”

His work with Air Canada is a case in point. Since 2006 the airline has been using the EQ-i in its recruitment of new pilots. David Legge, senior vice-president of operations at Air Canada, says the tool provides an important window onto a candidate’s behavioural competencies, skills that a traditional interview scenario may overlook.

“Someone who scores well on the EQ-i is likely to have very good crew-resource-management skills,” says Legge, who recently expanded use of the tool to recruit managerial and maintenance staff. “People who are more emotionally intelligent are generally more positive, more willing to embrace change. They interact with other people better and, over the long term, they make better employees. The EQ-i helps us bring the right people into the company.”

The tests Stein publishes have been used to assess the emotional intelligence of millions of people around the world. Lucky for them—and for me—Stein’s ultimate message is an uplifting one. Unlike with IQ, we can improve our EQ (see “How to Improve Your Emotional Intelligence” on page X).

According to my EQ test results, I am neither a Clinton nor a Jobs, and I have some serious work to do. I scored very high on components like emotional expression and empathy (not surprising for a writer), but extremely low on stress tolerance and reality testing (again, not surprising for a writer, but don’t tell my boss). I also have a worrying imbalance between independence and problem solving.

“You need to learn to step back, detach yourself a bit and think more clearly when emotions are involved,” Stein tells me. “You know where you’re coming from, as you’re a superstar in empathy, but now you have to go inward, to understand how stress is affecting you.”

All in all, my EQ score is almost exactly the average for the population (although I will keep reminding my wife of that “superstar in empathy” comment for years to come). And while this is disappointing to learn, it is probably wise to get over my emotional reaction to the result and view it as positive. As Stein counsels, now I have some good benchmarks to aim for.

Daniel Goleman got a lot of things right, back in 1995, when he published Emotional Intelligence. But he was wrong about one thing. The sapiens in Homo sapiens is actually Latin for “wise” or “knowing”—not simply for “thinking.” In this light, Steven Stein, through his company, books, lectures and consulting work, doesn’t just help people understand themselves better. He also helps them live up to a more holistic definition of what it means to be human.