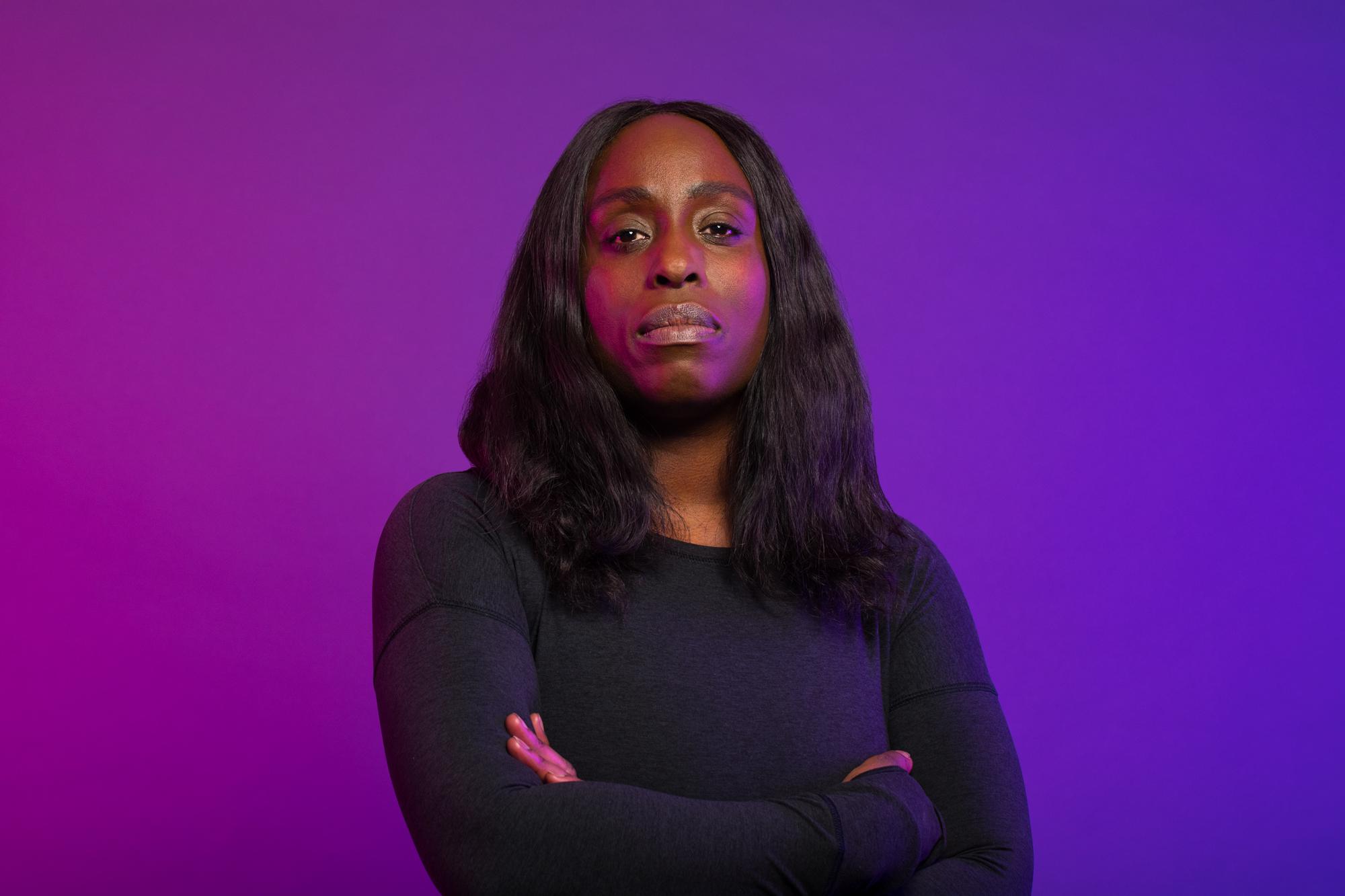 As the head of Pride Toronto, Olivia Nuamah has one of the most challenging jobs in the city. Her approach: “Remove every roadblock to participation.” (Photo by Samuel Engelking)
Article Date
Tuesday, April 30, 2019

The media portrayal of Olivia Nuamah, executive director of Pride Toronto,  suggests somebody not to be messed with: headlines declare that she sparks controversy and incites heated conversation. These refer to her decision, made unilaterally and despite protests by LGBTQ activists, to invite the police to participate in next year’s parade.

But on meeting Nuamah, what stands out is her ability to listen — not just with her ears but her whole body. She leans in, focusing, and waits until the other person has finished. Then she speaks in fully formed paragraphs. She touches often on history and how various sides came to be opposed, as if a deeper understanding of the past can help us see the way forward.

Sitting in her office filled with colourful photos of last year’s Pride festival, Nuamah laughs when these conversation skills are noted. She wasn’t born with them, she says. “What opened up that depth was university.”

Nuamah, now 47, grew up in a single-mother household in Toronto’s Moss Park public housing. Her mother had been an English teacher in Ghana, but now worked on an assembly line. The transition — from middle class to struggling and from warm to cold climate — was hard on the family, and her parents divorced.

There was a bitter custody battle, says Nuamah. “He went away and we never reconnected.” In Toronto, she says, life was about survival. There wasn’t room for much else.

Nuamah coped by tuning into music, specifically hip hop artists like N.W.A., Grandmaster Flash and The Sugarhill Gang. This grew into a lifelong interest in DJing. But her mother (though she also loved music) had different ideas for her only daughter. She believed education was Nuamah’s ticket to a new life.

“My education was my mom’s main focus. She said ‘the only way I’m going to lift you out of this is by ensuring you have access to the best education in the city.’” Her mom spearheaded a move to a high school with a better reputation in another neighbourhood.

Next, Nuamah studied international development and social anthropology at U of T Scarborough. Many issues she had grappled with on a personal level — race, class, colonialism, immigration — were suddenly the centre of study and discussion. The degree not only changed her circumstances, but gave her the narratives and overview to understand and contextualize her upbringing and family history. And it was exciting, she says: students and teachers were not afraid to push the envelope and take unpopular positions.

“My education was my mom’s main focus. She said ‘the only way I’m going to lift you out of this is by ensuring you have access to the best education in the city.’”

In her first international development class, the professor set out to provoke a response. “The first sentence out of his mouth was ‘we should start talking about the positive things that colonialism brought to the world.’ And I’m from Ghana and we were the first stop on the colonialism train and the first stop on the slavery train. The whole room started yelling at him. I was so awed by conversations about social justice and what it meant to live in a more just world. I thought, this is exactly where I need to be.”

She graduated in 1994. It would be another year before Canada recognized Black History Month, and another two years before the first lack female cabinet minister would be appointed (Hedy Fry, who was named Secretary of State for Multiculturalism and Status of Women in 1996; and is still serving as an MP). There weren’t many Black people in public office in Canada, nor much discussion in the media about the impact of geopolitics and colonialism on the African diaspora, and seeking more history and global awareness, Nuamah decided to make a move.

Her next stop was Manchester, England, and then to London with a British high school teacher who would later become her husband. She did a master’s degree in social anthropology, focusing on race, at Brunel University London, while also heading up the Racial Equality Council in the borough of Barnet. (In the U.K., these non-profit councils advocate for minorities.) There, she learned how to listen to people of diverse backgrounds and demographics, and how to convey their needs in compelling and relatable stories.

In April 1993, Stephen Lawrence — 19 years old, and Black — had been stabbed to death by five white youths while waiting for a bus in Eltham, Southeast London. The police handling of the case was littered with errors. A woman who might have been a vital witness phoned detectives three times in the first few days and said she had important information. Nothing was done. The suspects were identified almost immediately, but no arrest was made for two weeks. Amidst growing outrage over the mishandling, Nuamah joined the advocacy group Newham Monitoring Project, which fought for an independent inquiry. In 1997, they were successful.

The resulting Macpherson report took two years to complete and led to changes in criminal law, including the criminalizing of hate speech, an acknowledgement of the police force’s “institutional racism,” and changes to police procedure.

Nuamah sees parallels between the Stephen Lawrence case and the case against Toronto serial killer Bruce McArthur, who was convicted of murdering eight gay men between 2010 and 2017. Both involved grisly details and sparked national dialogue about marginalized communities receiving substandard service and unfair treatment from police. (Queer rights activists say that warnings of a serial killer preying on Toronto’s gay men were ignored by the police. And race may also have played a role: six of McArthur’s victims were of Middle Eastern or South Asian descent, a fact often missing from media coverage and public discussion.)

Perhaps because of her experience with the Newham Monitoring Project, Nuamah sees anger in these situations as a positive force, a tool for change. She says sometimes it’s only in periods of crisis that big institutions open themselves to criticism.

“The only way to work together is to make the decision that you are going to remove every roadblock to participation that there could possibly be, so that you could foster the environment necessary to create the change that you want to see.”

This attitude illustrates why Nuamah is a good fit for Pride Toronto, says Jane Griffith, partner and national diversity leader with the human resources firm Odgers Berndtson, who recruited her. “She’s got a really tough job. Her role is to bring very disparate groups together and understand what they mean. I’ve watched her with the board and she’s quite skilled at getting them to a point of reaching consensus.”

Nuamah’s job at Pride also reflects a difficult journey towards self-acceptance. She came out at age 40, first to herself, then to her husband of 20 years — who is the father of her two children and was very accepting, she says — and then to the public.

“The hardest part was the process of self-discovery. I wasn’t traumatized by the person I was. But at the same time I recognized that there was something missing.”

Nuamah is using her Pride job to work on bigger issues too, including a federally funded initiative on community public safety. It’s the culmination of a journey that began with that first international development class at U of T Scarborough.

“The two things came together: the awareness of my own sexual identity, but also the political awareness,” she says. “Growing up, we talked about poverty, different identities, colour and sexuality. It feels like every step has been a step to get to this very place.”