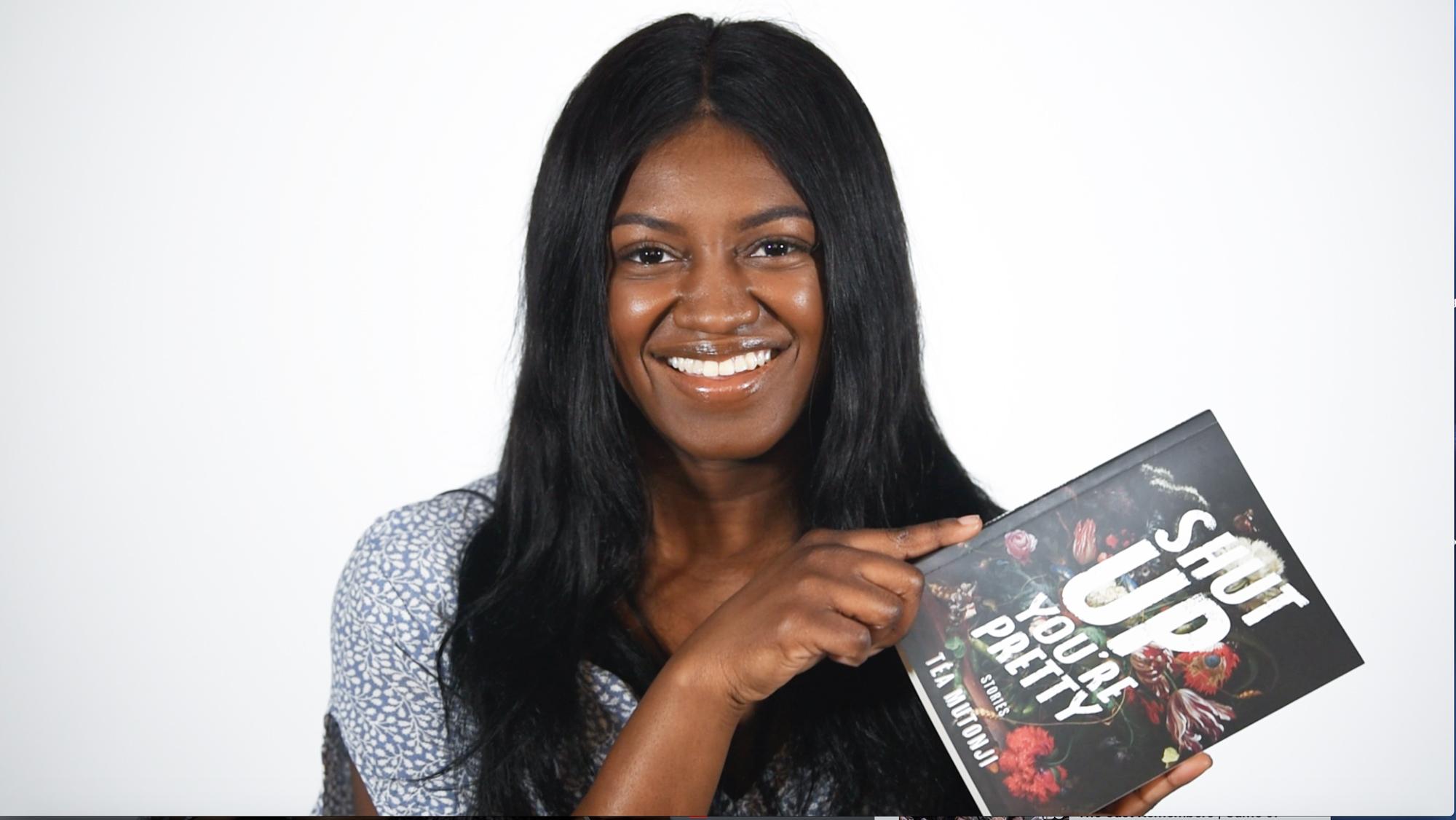 Téa Mutonji's "Shut Up, You're Pretty" is a collection of short stories about womanhood and was inspired by the author's encounters with other women in Scarborough. (Photo by Tina Adamopoulos)
Article Date
Friday, April 12, 2019

Téa Mutonji gets inspiration for her stories by listening to others. She’s discovered many of those stories at home in Scarborough, particularly those of women.

“I find that my experience and that of a lot of people that have grown up in Scarborough, is not as terrible or as sad as the world makes it out to seem, so that is something that motivated me.”

Shut Up, You’re Pretty is Mutonji’s newly published collection of short stories she originally wrote as poems while completing her minor in creative writing at U of T Scarborough.

Each chapter of the 176-page collection follows the protagonist, Loli, and her journey into womanhood –– including moving to Canada from Congo as a child, to her experiences leading up to early adulthood. Through these stories, we witness her sexual exploration, struggle to fit into gender roles, and topics of poverty and consent.

Mutonji moved to Scarborough from Congo with her family in 1999, and wanted a character that could mirror that transition.

“I wanted Loli to be a woman of the world,” Mutonji says. “I wanted her to be someone who is unafraid of her truth and her experiences — the bad, the good, the whole thing.”

In Tilapia Fish (the first story Mutonji wrote for the book and its concluding chapter), Loli reflects on her mother’s sacrifices while watching her cooking in the kitchen. Shut Up You’re Pretty, is about the spark of a romantic relationship between Loli and a boy named Jonas.

The Event, situates a young Loli with her friend Joli in a Galloway neighbourhood park that, “gang members used to host meetings.” One line reads, “We were the kids of Galloway, and they were anyone who judged us for it.”

Loli’s resistance against being boxed into a certain identity is what made Scarborough the perfect place to explore that idea, Mutonji says.

Mutonji volunteered at shelters in the city throughout her undergraduate education and has worked in the service industry since she was 14. In these jobs, she has been a part of many conversations and observations about “finding your space as a woman.”

“There was this connectivity throughout all of our stories and I thought, ‘How wild is it that we’ve all had a similar experience and so few people talk about them?’” she says.

“I find we usually get these experiences by a white perspective and we forget that despite being a white protagonist, it can also happen to a person of colour.”

“Diversity to me is both an empowering and damaging concept,” she says. “It insists on an "other" but it also recalls that there's been a quintessential form of voices and there needs to be a more wide range of it.”

Released this month, the book is the first to be published under VS. Books, an imprint of Arsenal Pulp Press. Mutonji was the first author to be offered a mentorship by Calgary-born musician and author Vivek Shraya. Founded in 2017, VS. Books support writers of colour and offer an annual mentorship and publishing contract to an emerging writer between ages of 18-28.

She is currently on an Ontario-wide book tour, including the Scarborough Book Launch at U of T Scarborough on April 18 at 6 p.m. at the Ralph Campbell Lounge.

“I hope this book is a reminder that life is great and crazy and messy,” she says. “Treat each other with kindness, because you don’t know the story behind someone.”