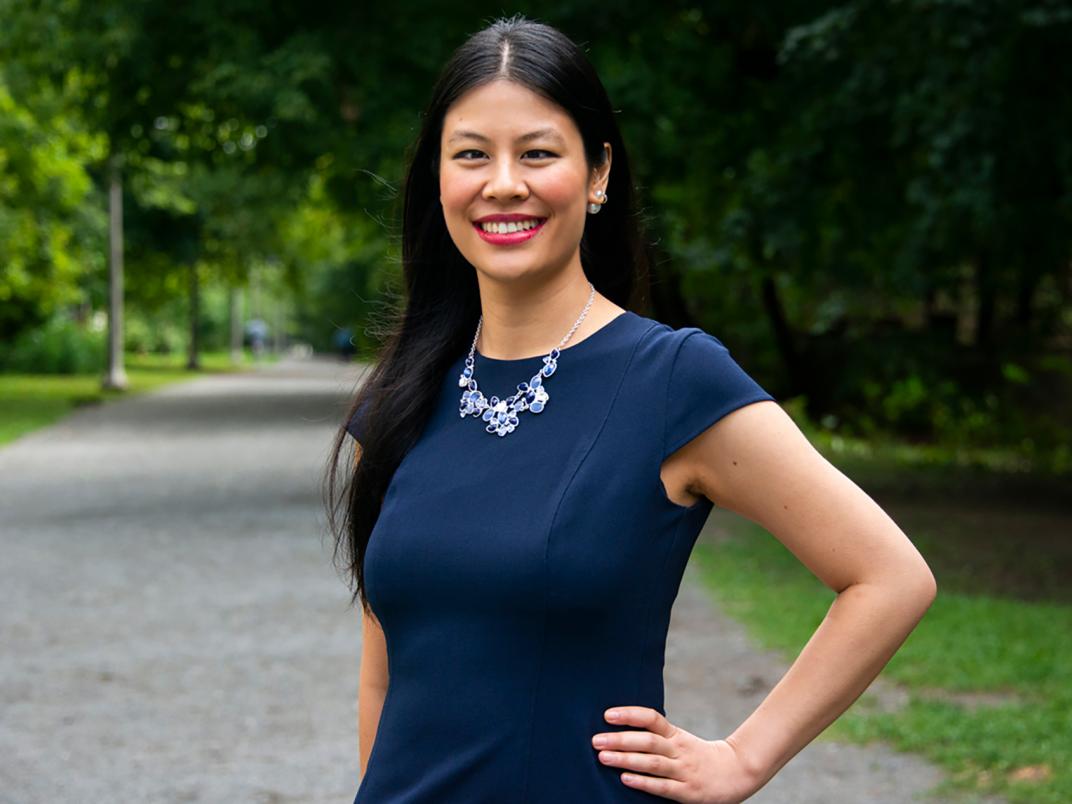 Writer Karen K. Ho, a graduate of the joint-journalism program at U of T Scarborough, landed on the international cover of TIME magazine for her feature on Crazy Rich Asians. (Photo by Kristin Foster)

On a recent international cover of TIME magazine, actress Constance Wu is engulfed in a fluffy yellow coat, gazing off in the distance. It’s a look only a Hollywood actress can pull off. The headline “Crazy Rich Asians is going to change Hollywood” is neatly piled in the lower-left corner.

Ho, a graduate of the joint-journalism program at U of T Scarborough, has had a rewarding career as a business, media and culture reporter. With articles in GQ, The Globe and Mail,The Walrus and Toronto Life, and as a broadcast associate on Bloomberg’s Business News Network, she is well-known in the journalism world.

But when she was approached by TIME to write about the box office hit Crazy Rich Asians, it took her by surprise. In fact, she thought it was a prank until she got a follow-up email.

Her GQ feature on actor BD Wong came to the attention of TIME’s culture editor through a mutual friend. It was also the first time Ho had interviewed a celebrity. To have enough recognition to land an entertainment piece for TIME on a movie like Crazy Rich Asians was surreal, she says.

With her business roots, Ho wrote about why and how the movie was going to dominate the box office. This included interviewing several of the movie’s stars, director Jon M. Chu and Kevin Kwan, the book’s author (which, by the way, is part of a trilogy).

Ho could recognize traditions and marvel in the small details in the movie that one wouldn’t. This is what made the production’s fine-attention to detail so important in the representation of the Asian community. It’s also what made her identity an “asset and not a detriment,” in writing about the movie – it’s where the distinction between bias and expertise meet in journalism.

“I know what it’s like to visit Hong Kong and directly have that experience where it’s like, “‘you’re like us but you’re not one of us because you grew up and were born somewhere else,’” she says.

Still, Ho never thought it might be considered for the magazine’s iconic red frame.

“In the middle of the interview, [star] Constance Wu was like, ‘I think it’s going to be a cover,’” she laughs. “I was like, ‘What are you talking about?’”

Even though Serena Williams ended up on front of the North American edition, editor-in-chief Edward Felsenthal personally picked her piece to be on the international cover, with readers around the globe picking up the magazine with Ho’s name on it. Having her name in print on a legacy magazine is a professional landmark that she is proud of — and still gets emotional about.

Ho grew up in Scarborough and developed her craft working for The Varsity student newspaper as the satellite campus bureau chief for U of T Scarborough. Despite not having the best grades during her time in the journalism program, Ho developed skills that she says help her to this day.

“I always tried to write something that wouldn’t make people feel like they wasted their time – that would make them laugh or see the world differently,” Ho says. “Don’t be afraid to quit stuff if it bores you, but take advantage of as many opportunities that you can.”

Like many new journalists weaving their way through the media industry, it took time for Ho to find her voice, a beat to follow, and perhaps most importantly, a space where she could thrive and find stories she is passionate about.

“I felt like I was fighting to figure out my career and had mixed emotions about my ambition. I couldn’t figure out what the next steps should be.”

Reflecting upon her time at U of T Scarborough and as a young reporter in Toronto, there were (and sometimes still are) times of self-doubt.

“Sometimes, I still feel like I’m nobody from Scarborough,” Ho says.

This is part of what makes her TIME cover all the more of a landmark in her professional career.

“I had a sense I was aiming for something like this from a long time ago and I didn’t even know it.”