Two U of T Scarborough students are debuting their two-part installation, which features boards that use light to create sound, at Nuit Blanche. (Submitted photo)
Article Date
Wednesday, September 26, 2018

At first glance, Christopher Dela Cruz and Patrick Atienza’s exhibit, Long Distance Relationship, looks like two large, wooden panels. But when someone moves in front of the board, it emits a sound. As they move, the pitch changes.

On the night of the art festival, one panel will be placed in the Scarborough Civic Centre, the other in the Campbell House Museum. The sound is sent through two speakers. In each location, one speaker transmits sounds made in Scarborough, the other from downtown Toronto.

“We want to eliminate the idea of, say, gender, ethnicity, socio-economic status, age and all the stigmas that separate us,” says Atienza, a recent graduate of the studio program at U of T Scarborough. “By using this project, we don’t have those anymore. You don’t know who you’re communicating with.”

The exhibit is also named for the tiny sensors, light dependent resistors, that allow the panels to create sound. The sensors are tiny orange rectangles with two wire legs, only about an inch long. But they pack a punch. They filter out electricity based on the amount of light shining on its surface — more light creates a higher pitch, less light creates a lower one.

“In a sense it’s like a telephone, where you’re making a conversation with someone,” Atienza says. “But you’re using your body to make the sound instead of vocalizing.”

“It’s like making music,” adds Dela Cruz, a fourth-year studio and computer science student. “If you can understand each other and you can communicate well, you’re sort of harmonizing together.”

During Nuit Blanche, two people in two different locations could theoretically wave their arms in the same way at the same time, producing the same sound. One may produce a particular note or melody, while the other chooses to harmonize or play the same notes. One may move and hear nothing from the other side.

“It’s also about that feeling of communicating with no one, like you’re reaching out and no one is there,” says Atienza.

The pair was inspired by relationships lost to or hindered by distance and the drive to feel connected with those that are far away. They were also inspired by the art festival’s efforts to connect with Scarborough’s art scene.

“There’s such a stigma between the type of people that live in Scarborough as well as the people who live in downtown, even if people don’t want to acknowledge that,” says Atienza. “With this, you’re able to communicate and not know anything about the other person.”

Dela Cruz took inspiration from a book by Canadian composer R. Murray Schaffer, who wrote Soundscapes, about how senses of hearing and touch intersect.

“That feeling that you get when you touch an object,” he says, laying his hand on a nearby table, “You’re not really feeling the table, you’re feeling the vibrations of the table at a molecular level.”

Similarly, he says, perceiving sound is the result of movements of tiny hairs in the ear that vibrate, the brain then translates that movement into sound.

“In a way, when you hear me talk and when you hear sound in general, it’s like you’re being touched remotely,” he says. “There’s a certain type of intimacy with sound that I really like, it’s comfortable.”

Long Distance Relationship will join Lost & Found, another recent installation from Scarborough. In May, six stone fragments were relocated to the Campbell House Museum from the Guild Park and Gardens in Scarborough. The exhibit was curated by three graduate students from U of T’s Museum Studies Program.

As Sept. 29 approaches, the duo is putting the finishing touches on their piece.

“I’m most excited to see just the people interact with it,” says Atienza.

“I’m excited to hear you from the other side,” replies Dela Cruz. 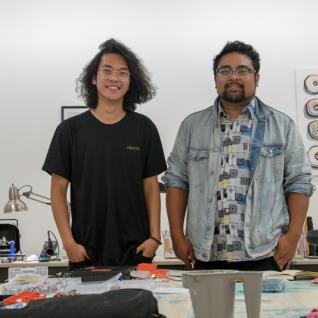 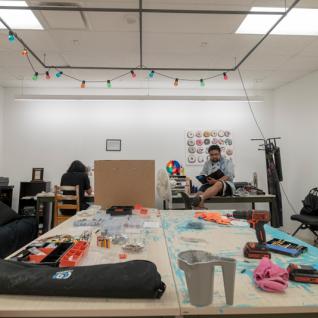 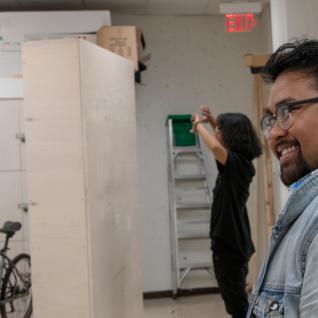 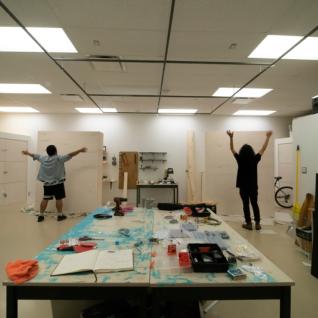