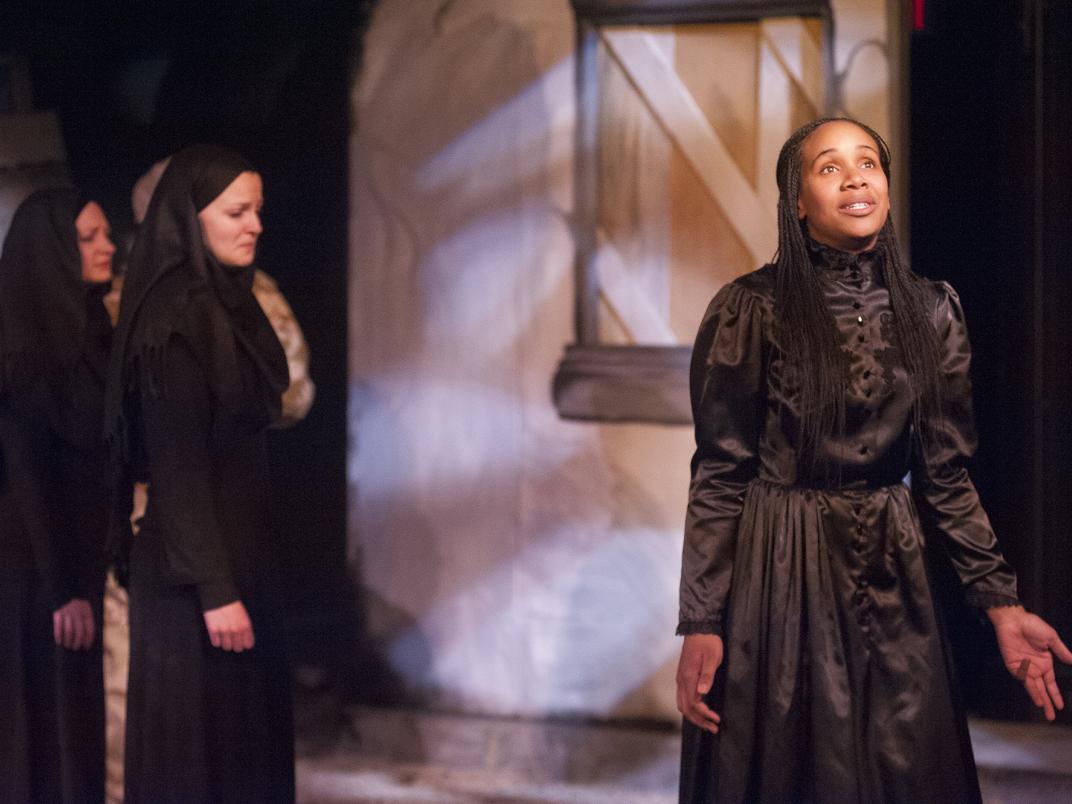 A database - funded in part by U of T Scarborough - helps schools and theatre companies find and produce more plays written by women.

A 2016 survey of post-secondary theatre productions across Canada found that only 18 per cent of main stage plays were written by women.

For Rebecca Burton of the Playwrights Guild of Canada, the research underlined a troubling issue in post-secondary theatre programs.

“We discovered that there were universities where you could go through your entire four-year BA program as a woman and never see a play written by a woman on the main stage,” said Burton, a graduate from the University of Toronto Drama program.

Burton teamed up with University of Toronto Scarborough theatre professor Barry Freeman to spearhead the PLEDGE (Production Listing for Enhanced Diversity and Gender Equity) Project, a database of plays written by Canadian women.

The database was developed as a tool for university and college theatre programs to easily find plays written by women. One of the requirements for a piece to be included in the database is a cast size of at least six. The reason for this stipulation is to ensure enough parts for a large ensemble cast.

According to Freeman, finding plays written by women with a large enough cast has been difficult in the past for school programs because “the perception has been that a lot of Canadian plays have a pretty small cast.”

While theatre training programs tend to have a majority of women, the plays they stage often lack enough available parts for women.

“The programs can be anywhere between 55-75 per cent women but the plays they would do would feature five lead male characters and one female,” said Burton. “We kept asking ‘why do they keep doing all these plays that feature men, when we have more women in our program? ’”

Using scripts written by women creates a “trickledown effect” in which the number of female roles goes up, and even better, the quality of the roles improves.

“Often times women take a back seat and play a [lead character’s] daughter, a lover or a mother and you don’t even really need to be there,” said Burton. The roles tend to be “juicier” when written by a woman and allow more positive representation.

This trickledown effect is also noted on the production side. Burton notes that if a play is written by a woman it is more likely to be directed by a woman who will likely hire a woman designer and that mentality follows with each aspect of a production.

“It helps improve choices for women across the board,” said Burton.

The project is funded by the Equity and Diversity in the Arts (EDA) initiative through the Department of Arts, Culture and Media at U of T Scarborough. EDA supports student- or faculty-run programs that promote diversity of all kinds.

Freeman notes the campus’s integrity and commitment to diversity is one of the reasons the school is a great emissary for the project.

“The ethic of equity is rooted in UTSC’s own diversity,” said Freeman. “The fact that there even is an EDA committee in the Department has a lot to do with the character of UTSC.”

With a full launch expected this May, the site has already received a lot of attention from the theatre community.

“An exciting thing that happened when we did our soft launch was we got a lot of people appealing to us to add to it and that was always our hope,” said Freeman.

Currently, the database has about 325 plays. Thanks to a recent outpouring of submissions from Quebec, the almost exclusively English language collection will expand to include French language plays.

The site also serves as an instrument for accountability because a section of the platform will host a pledge page where schools will make a public pledge to improve the representation of women on their stages. Burton says she hopes to see pledges start rolling in for the new school year in September.