A plush pal, a ping pong paddle and more: Here’s what U of T Scarborough students brought from home 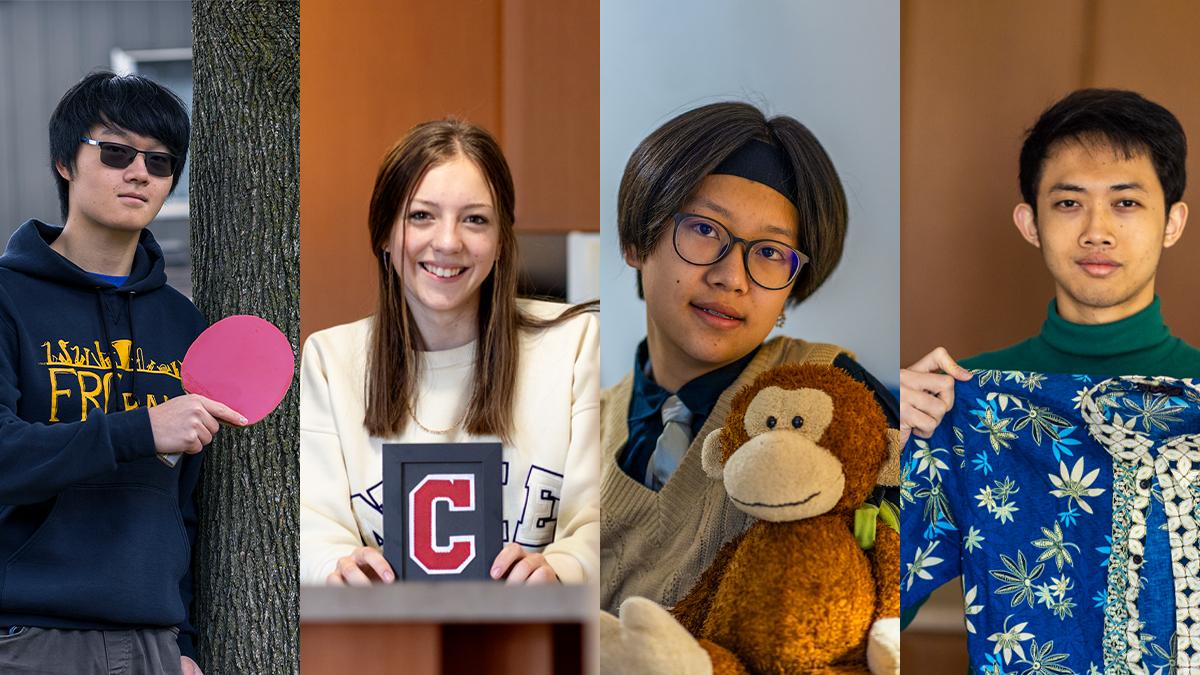 Leaving home doesn’t mean leaving everything behind. We spoke to first-year students living in residence about the most meaningful items they brought with them, and how those objects helped them create a home away from home 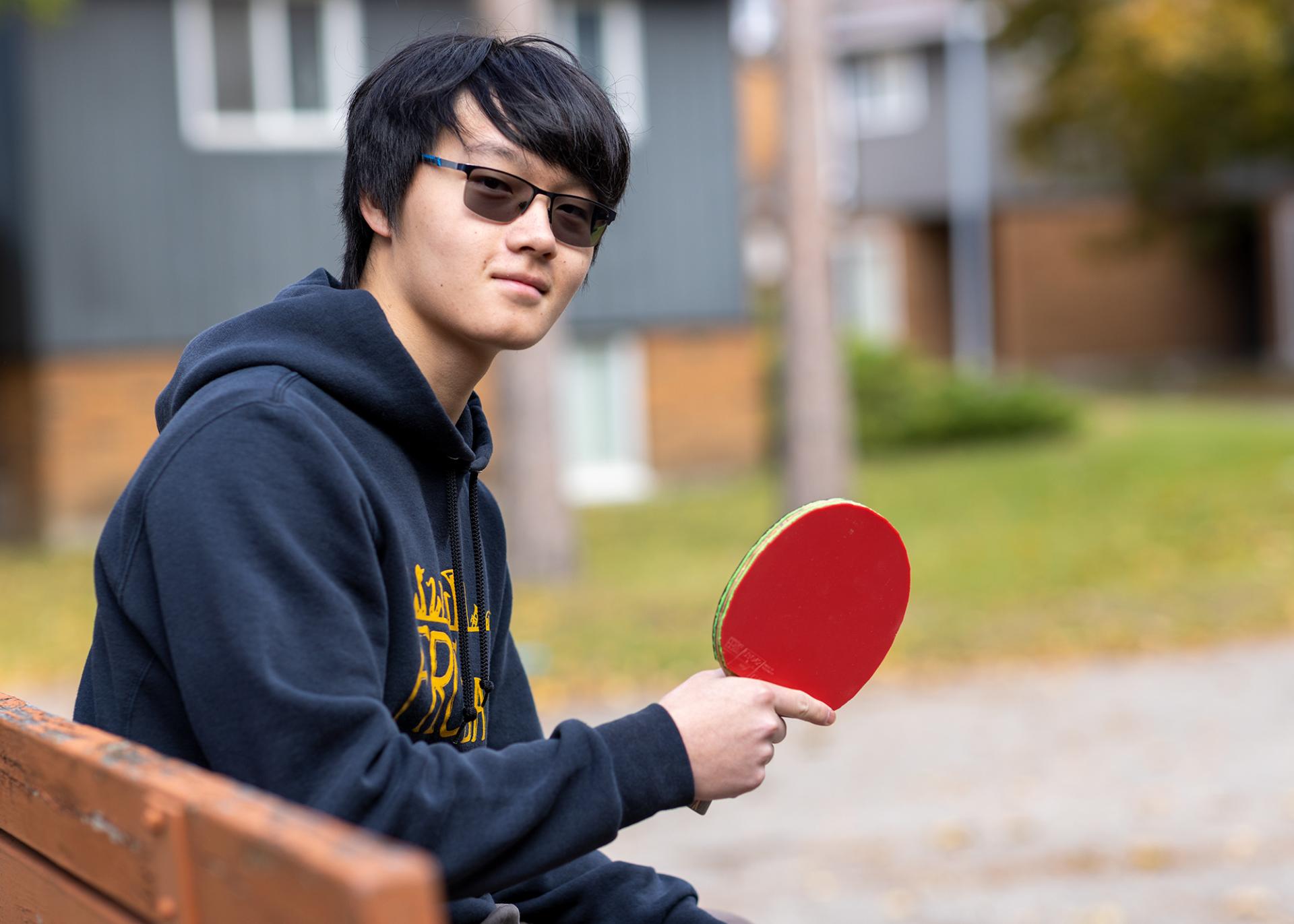 He says it becomes more important to have a certain kind of paddle the more you play. Those who take an offensive approach need a bouncier rubber, while players who favor defense need one with more pips — the little nubs on the rough side of the paddle.

“When I started playing, I realized that I could utilize a technique called a lob, where you return the ball really high,” he says. “I could beat some of my friends with it in junior high, but when they got better at the game I had to switch to a more offensive style.”

Liu has played ping pong since age 12. The game has always had a social element for him, and a shared interest helped him make a friend on his first day at U of T Scarborough. He got his trusty paddle in 2018 and keeps it in its original case.

“When I brought my paddle here, I got the chance to meet more people just by playing a sport that I love,” says Liu, who recently tried out for the ping pong team at U of T’s St. George campus.

He’s enjoyed living with his housemates at U of T Scarborough’s residence, who’ve found they gravitate toward the same drink of choice.

“We evaporate milk. By that I mean we drink it so fast it's practically gone as soon as it’s entered the house,” he says. “Last week I brought home 12 litres of milk. It’s gone.”

Thankfully there’s a Costco near campus 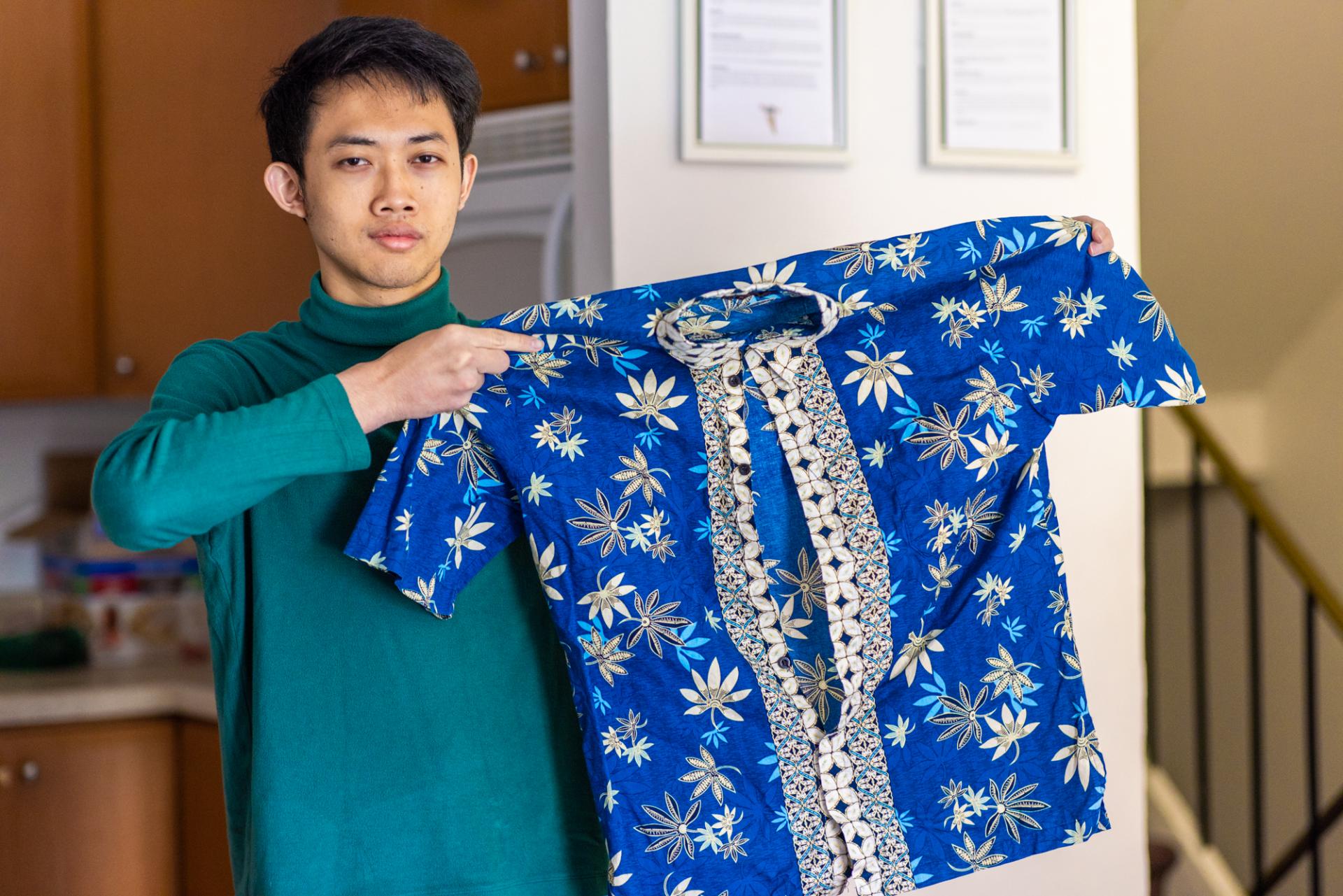 Muhammad Enrizky Brillian was chilly in his lecture on Oct. 2. It was worth it to wear a shirt made of batik — one of the most significant cloths of his home country.

Brillian was celebrating Batik Day, an Indonesian holiday commemorating the date the United Nations Educational, Scientific and Cultural Organization (UNESCO) officially named the batik a Masterpiece of Oral and Intangible Heritage of Humanity. The traditional textile is created by applying beeswax to cotton cloth before dying it, then boiling the fabric to remove the wax.

“When I see this shirt, it makes me think about the diversity of my country,” he says. “There are thousands of traditional shirts in Indonesia and this is just one of them.”

Batik fabric is usually patterned with flowers or animals — a nod to the nation’s massive rainforest. Brillian’s bright blue shirt has the former, and he’s worn it to formal events since getting the garment in seventh grade. He’s also staying connected to his culture in his role as a marketing associate with the Indonesian Students’ Association at U of T Scarborough.

“When I wear this shirt, I recall all the events that I attended. I can imagine those past memories,” he says. “It reminds me that batik is just one part of rich Indonesian culture.”

Brillian is in the mathematics co-op program, the next step in his long and successful journey with numbers. He’s won gold at national and international math competitions and worked as a tutor preparing students for the National Science Olympiad.

He’s planning to compete in the upcoming William Lowell Putnam Mathematical Competition, one of the world’s most distinguished math exams. He’ll write the six-hour test in early December, but it may be too cold to wear batik. 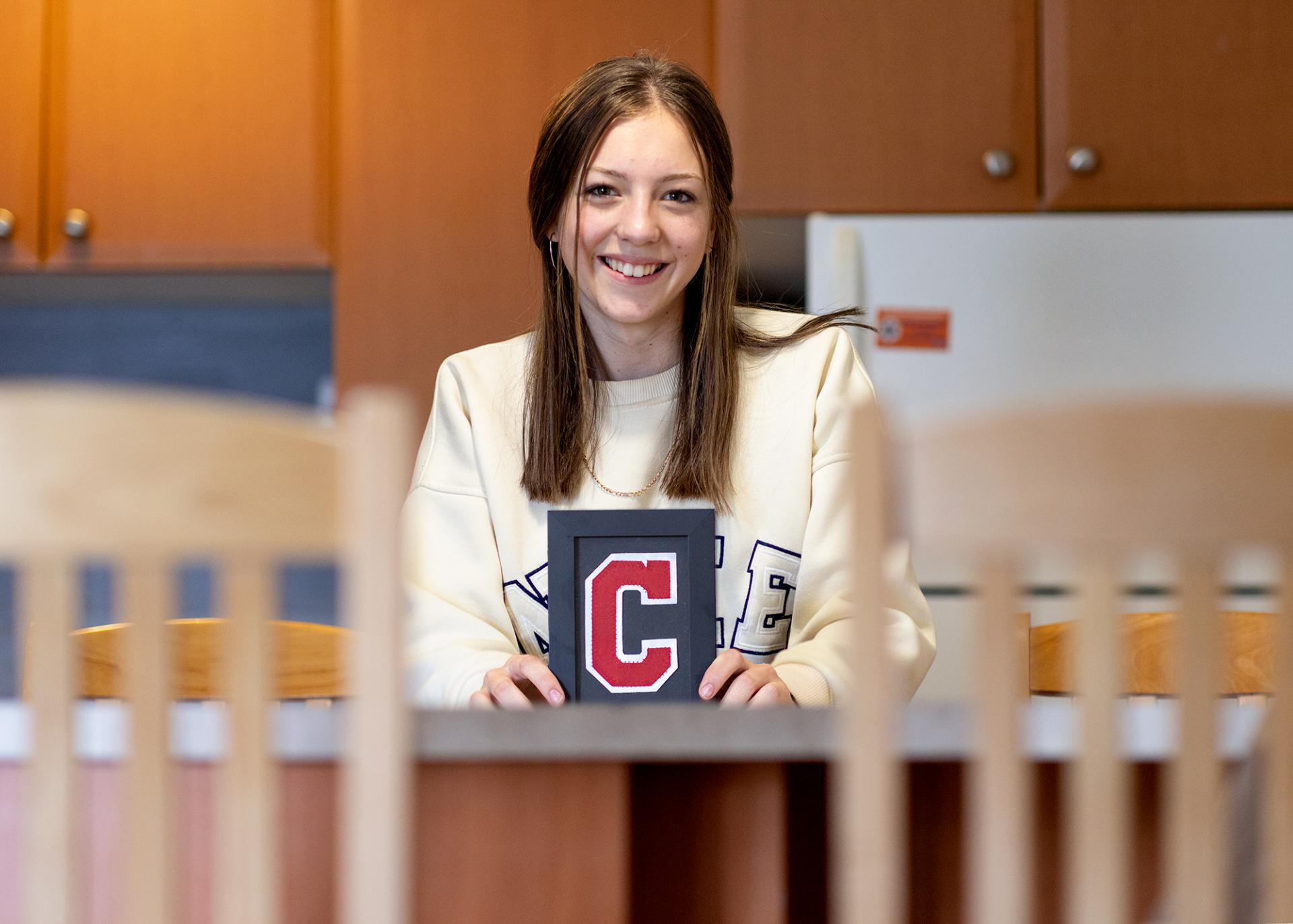 Erin Middleton didn’t hesitate to become the only woman on U of T Scarborough’s men’s ice hockey team.

Middleton has lived and breathed the game since age five, though this is her first time playing with men. She’s not one to shy from a challenge — a framed letter “C” helps her keep that in mind. The patch was given to her last year, after her first season as captain of the Markham-Stouffville AA women’s hockey team.

“What was really special was that I was chosen through a team vote,” she says. “It's nice when it comes from your teammates, knowing that they support you and want you in that position.”

She says being captain was less about strategy and more about camaraderie. It’s not a role for the best player, rather for one who can make sure everyone feels safe, valued and heard.

Middleton is also playing for U of T Scarborough’s women’s hockey team, and switching between the leagues takes some quick mental adjustments. She says there’s still a unique bond between all the players.

“You have a like-mindedness when you play hockey together but also go to school together,” she says. “It means you have similar goals and are all similarly driven. It’s a nice connection.”

Middleton has only ever lived in Whitby but frequented Scarborough throughout her childhood to visit her grandparents. She recently found a new appreciation for the Scarborough Bluffs after visiting with friends who’d never seen the landmark.

“They were so excited, and I thought, ‘Huh, it actually is really cool,’” she says. “Things work like that sometimes, you don't really recognize what's in your own backyard until you stop to appreciate it.” 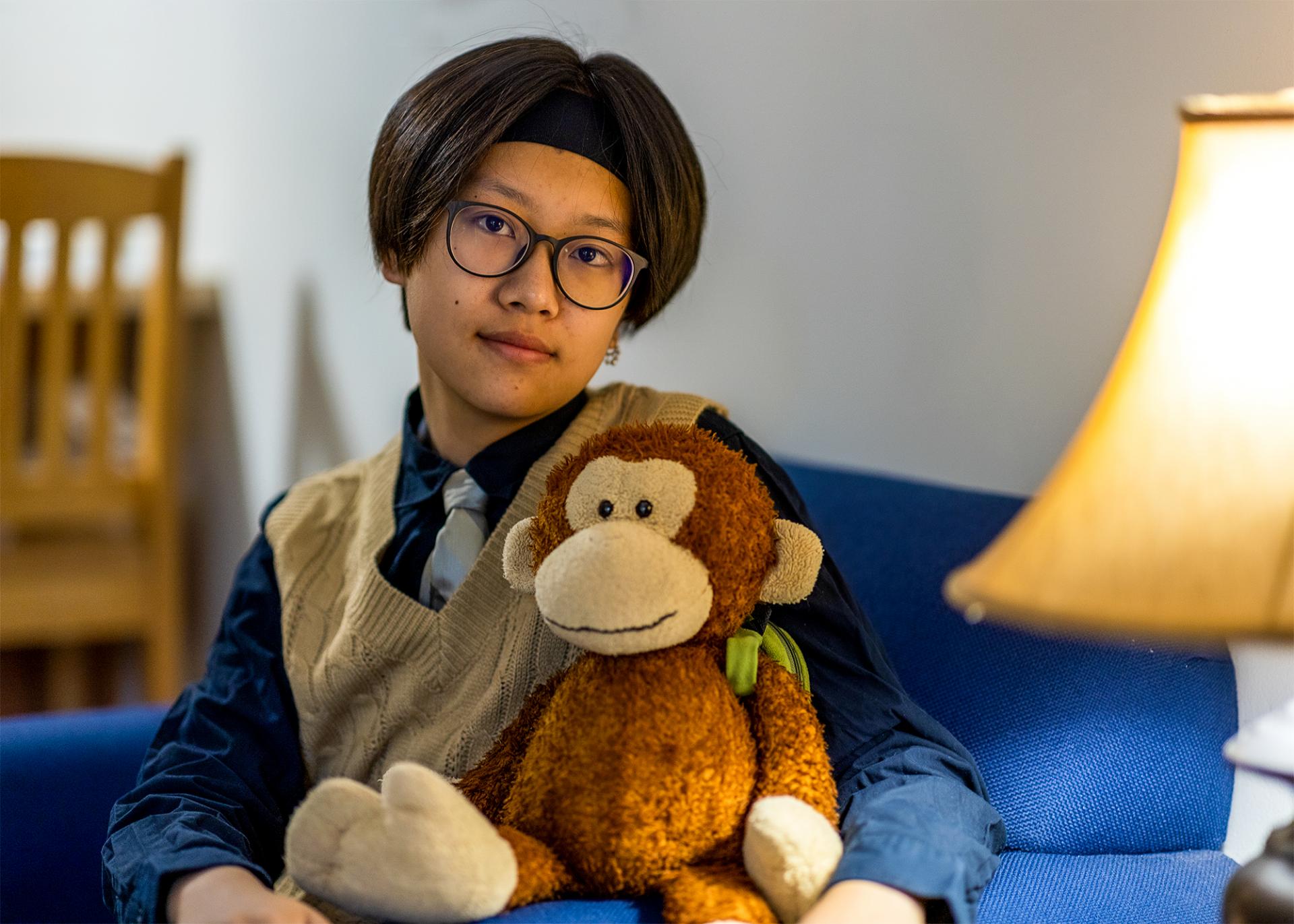 Cici Nie’s zodiac sign is the monkey, so the stuffed animal she got at age two was fitting. She named the toy Boots, after the monkey sidekick from one of her favourite TV shows at the time, Dora the Explorer. He’s been by her side ever since.

“Sometimes it’s like he's a brother of mine,” says Nie, an only child.

Boots is in surprisingly good shape for a well-traveled, 16-year-old monkey. Nie has taken him across China and to countries including New Zealand, Sri Lanka and Thailand. He now sports a backpack from an annual charity fair Nie attended as a child. Inside is Boots’ own plush companion, a small gray bear from a teddy bear museum in China.

Nie had never been to Canada, or North America, before arriving at U of T Scarborough. She says the busy big city of Shanghai is a world away from Scarborough, but she’s enjoying the campus’ peaceful atmosphere.

“I like Scarborough because it's close to nature. There’s the river behind campus, there’s a lot of trees and you can enjoy the fresh air,” Nie says. “Scarborough is quiet and really nice for people like me who are tired of living in big cities.”

Nie hopes to major in history for the same reason she enjoys traveling — she’s drawn to things that “broaden your view.”

“It’s useful and interesting to me. When you are really young and only know part of the world, learning history helps bring more to your eye.” 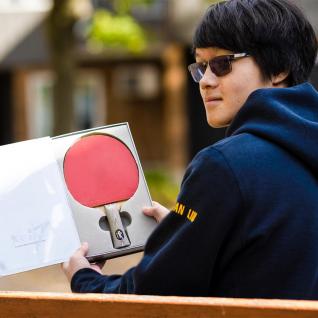 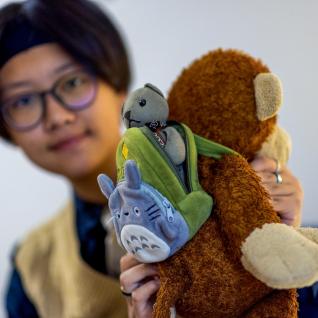 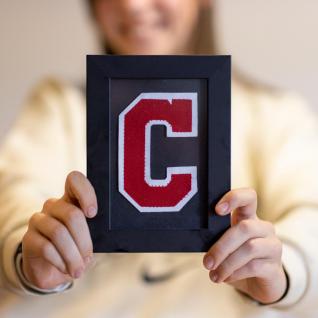 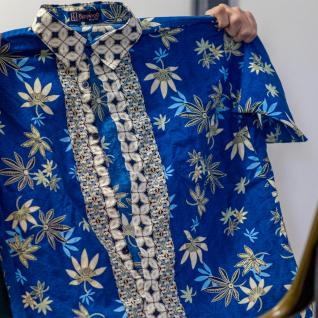