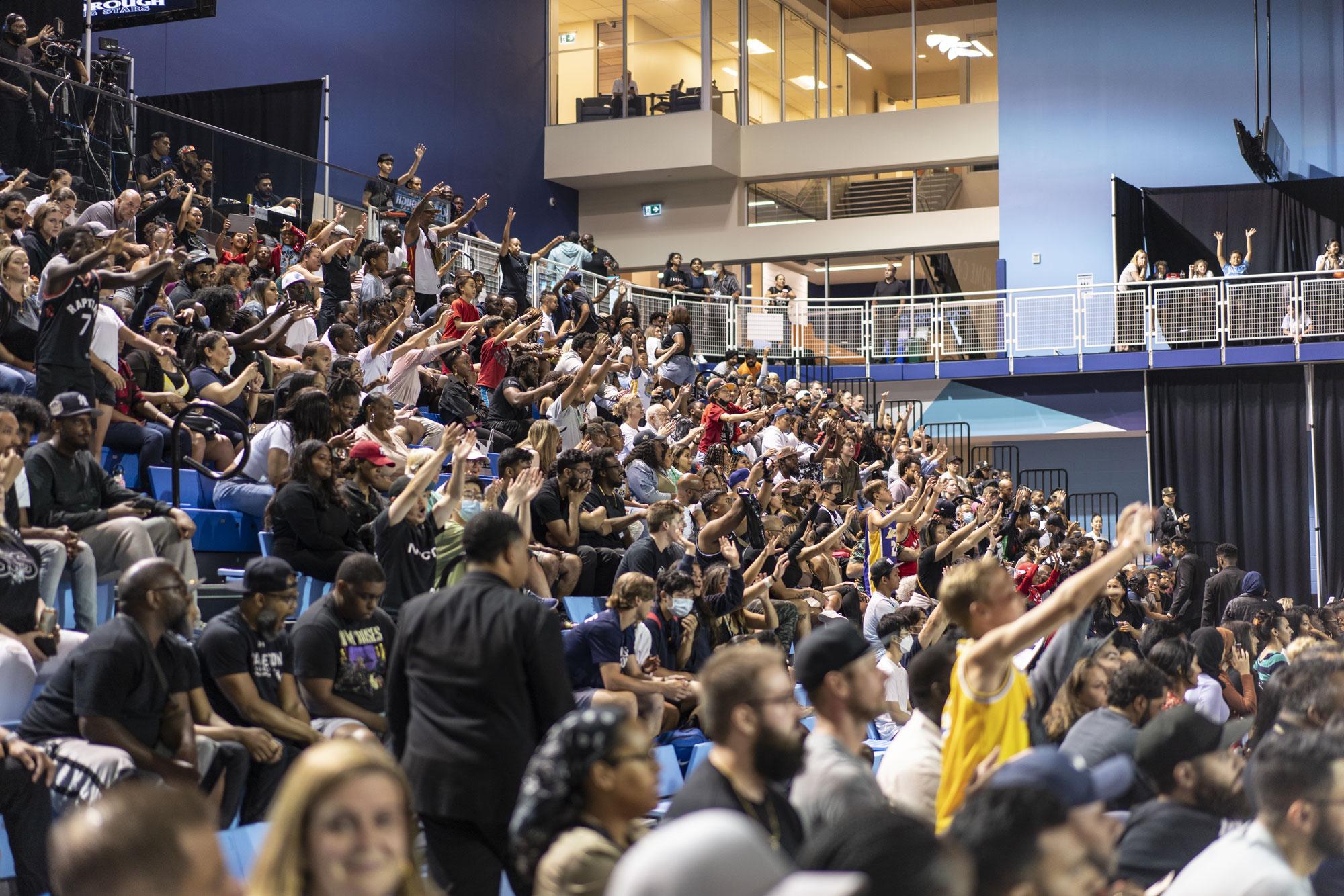 Hundreds of U of T Scarborough students were in attendance at the Scarborough Shooting Stars game on July 28 at the Toronto Pan Am Sports Centre (Photo by Sophia Seoh)
Article Date
Tuesday, August 2, 2022

A new tradition at U of T Scarborough began when hundreds of tickets to the Scarborough Shooting Stars’ (SSS) final home game were donated to students.

The SSS is the GTA’s first franchise in the Canadian Elite Basketball League (CEBL) and has a roster of prolific players, including former Toronto Raptor Jalen Harris. Home games were played at the Toronto Pan Am Sports Centre (TPASC) throughout the summer, which saw chart-topping rapper Drake cheering from the sidelines.

The stands were packed with U of T Scarborough students on July 28 after SSS co-owner Sam Ibrahim donated 250 tickets for U of T Scarborough Student Leadership Day, hosted by the Office of Student Experience and Wellbeing (OSEW).

"When local leaders serve with a generous spirit, it inspires us all to build a stronger community," says Neel Joshi, the new dean of OSEW at U of T Scarborough. "Having 250 students, [as well as] staff and community partners all together to cheer on the home team for their final home game not only unites us as a campus, it makes us even prouder to be in Scarborough."

Ibrahim is a former U of T Scarborough student and grew his business in Scarborough. Joshi says the new tradition came about because both he and Ibrahim "believe in Scarborough's potential and believe that our community has so much to contribute to the world."

"This was about two Scarborough-raised people who are fiercely proud and grateful to be from here and want to show the world why we are a place where leaders are humble, hardworking, and authentically exhibit inclusive excellence."

At halftime, Joshi received an SSS jersey in recognition of his contributions to the Scarborough community. Olympic champion sprinter and Scarborough native Andre De Grasse also received a jersey.

Tickets were distributed to student groups and raffled off on the university’s social media channels.

"The air was full of excitement and silence, hoping that our team would take the win each match," says student Sophia Seoh, who attended the game. "The new tradition of donating tickets to students to witness an exhilarating basketball game is very kind, and I hope other students can experience it."

Stories come to life at human library event, where the books are people