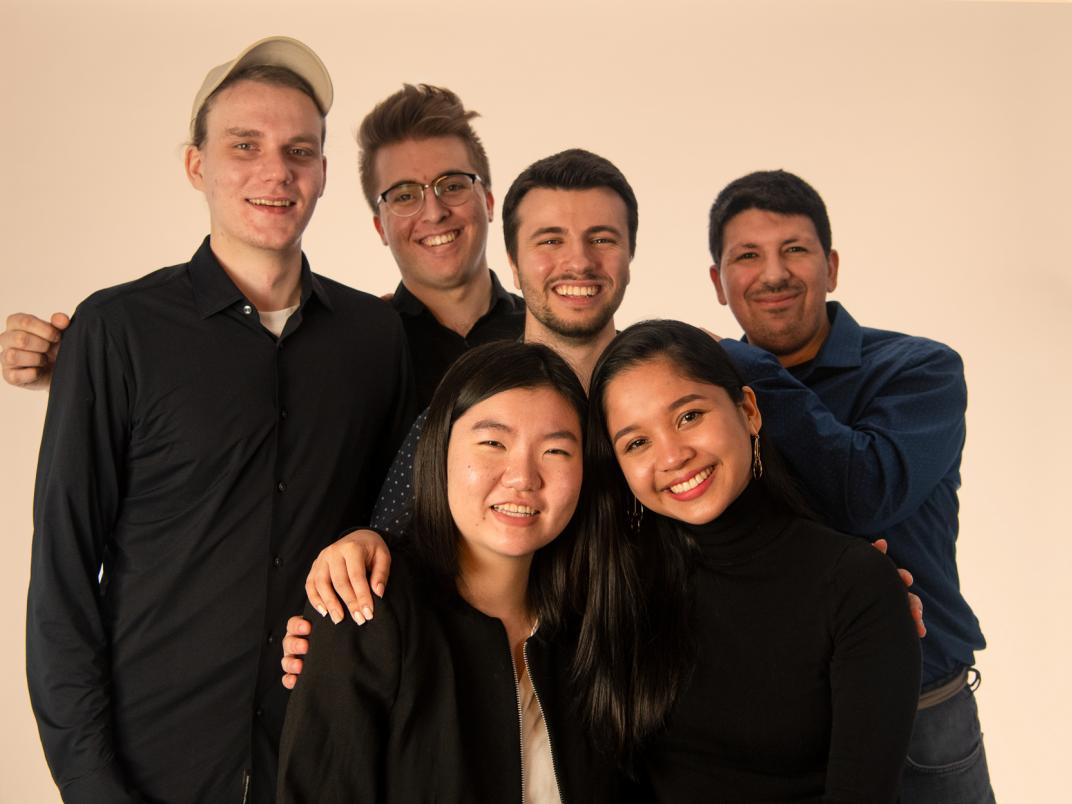 UTSC student journalists were behind the top two student features in Ontario this year. (Photos by Alexa Battler)

On a snowy February morning, police put up an excavation tent to thaw the topsoil of a Toronto home — the search was on for human remains left by serial killer Bruce McArthur.

Before the snow could even collect atop the tent, U of T Scarborough journalism student Taylor Bridger was there to snap a picture.

“I was the first on the scene. Now, every single day, everywhere I go, I always have my camera on me,” Bridger says. “You have to get to the scene, you have to go right away, you have to be decisive.”

In the following months, Bridger teamed up with four other students, three of whom are in U of T Scarborough’s joint journalism program, to cover the McArthur case.

The Ontario Community Newspapers Association (OCNA) recently awarded their investigative piece first place in the Student Feature Writing category. The writers shared the stage with another group of their classmates, whose article placed second in the same category.

The McArthur feature included photos, videos, infographics and interactive digital elements. Each student wrote one of the article’s segments, which delved into topics including the case’s complex impact on the LGBT community and McArthur’s use of social media.

“When the arrest was made, I wanted to know right away what would make a man do something like this,” says Sergio Arangio, who wrote about expert insights into the psychology of serial killers.

Arangio was the first to interview Sasha Reid, a Toronto-based psychologist who was later featured repeatedly in mainstream media coverage of the case.

“It was interesting to be side by side with the big guys trying to cover something as big as this,” he says.

Their report also included exclusive content that other outlets did not pick up, such as Bridger’s detailed look at how Canada’s most recently discovered serial killer used social media to find his victims.

As the case unfolded, the group noticed that many of the victims were South Asian. In his segment, Bobby Hristova shined a light on them by reporting on a stage production which explored identifying as queer in the South Asian community.

Though the playwright declined to comment, Hristova incorporated views from community members and the Alliance for South Asian AIDS Prevention (ASAAP). When the ASAAP announced it would conduct its own investigation into police handling of the case, Hristova recalls being the first in a crowd of reporters to ask a police spokesperson to comment.

“No one in the room knew about that, some of them came up to me afterwards,” says Hristova, who also created an interactive timeline of the dates that the men went missing from Toronto’s gay village.

“To me, that’s the epitome of journalism, taking something that’s really jarring and fleshing out all the details for the audience.”

The second-place story was an in-depth update on Syrian refugees who came to Toronto in the past three years. The story focused on how these families have settled, and highlighted the barriers they have experienced since arriving.

“I spoke to my source about how Canadians might automatically assume refugees are dealing with PTSD because they come from a war-torn country,” says Louise Palma, whose segment explored mental health services available to refugees.

“But the struggle they deal with the most is actually the language barrier,” she adds.

For Mouhamad Rachini, who wrote a segment on translators and other refugee support workers, the article was an important exercise in navigating bias.

“Coming from a Lebanese background, I had a personal connection and felt like I did have an obligation to help tell this story,” he says. “For me, the challenge was the sense of bias, because we come from a similar background. I made sure to just focus on the quotes and the people.”

The article also told the stories of specific families now living in Toronto. Jessica Lam recalls an interviewee describing the feeling of the shrapnel still stuck in his abdomen after a bomb detonated in his home in Syria.

“I think it’s really important to learn how to cover a topic of this magnitude,” Lam says. “Because it was a long feature with multiple parts, it really helped to work as a team to tell the story in the best way.”