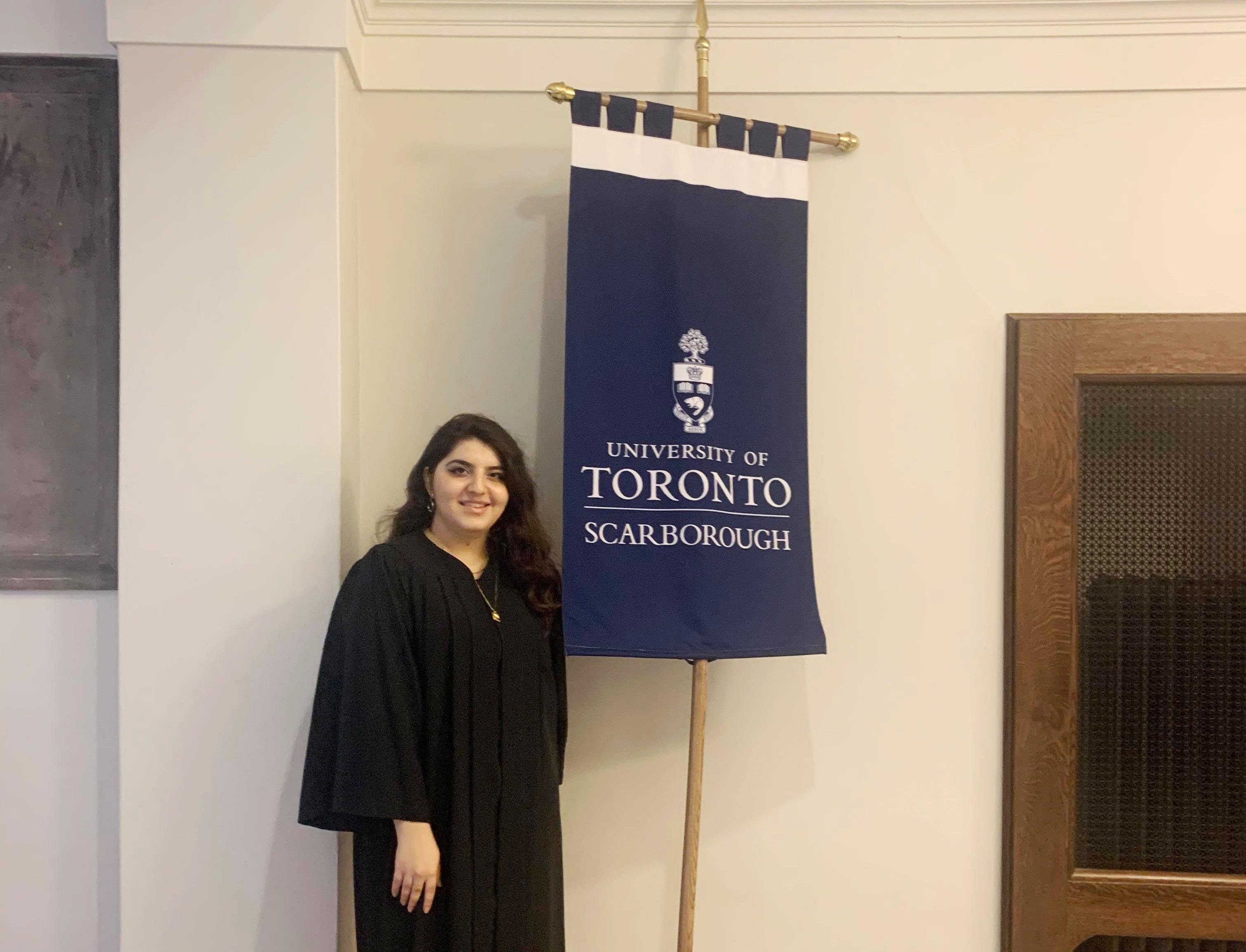 Annie Sahagian with the U of T Scarborough gonfalon. (Photo courtesy of Annie Sahagian)
Article Date
Friday, May 29, 2020

For U of T Scarborough student Annie Sahagian, representing the campus as an ambassador at the first of its kind U of T convocation, is a full circle opportunity.

“It’s an honour and a privilege to be asked to represent UTSC,” says Sahagian, fifth year student majoring in media studies and human biology. “My U of T experience truly made me who I am today.” On June 2, Sahagian will bring greetings to the graduating class of 2020 while standing next to the UTSC gonfalon (a banner hanging from a pole used for ceremonial occasions), along with select students from each U of T division.

Sahagian, an active student on campus, was selected by Vice-President & Principal of University of Toronto Scarborough Wisdom Tettey and Vice-Principal Academic and Dean William A. Gough.

Since arriving in Canada with her family as refugees from Aleppo, Syria in 2016, and then enrolling at U of T Scarborough with her sister, U of T class of 2020 student Carly Sahagian – Annie quickly integrated herself in campus life, volunteering and taking up several leadership roles in the pursuit of advocating for UTSC students.

Just some of Sahagian’s campus involvement includes serving as the student representative on the UTSC Campus Council and its standing committees, representative on the Student Mental Health Advisory Committee, roles in the tri-campus governing council, the Armenian Students’ Association and the Biology Students’ Association. She has also held multiple work positions, working in seven different departments across Scarborough and St. George campus campuses such as Office of Space Management, School of Continuing Studies and UTSC Development and Alumni Relations.

“From the UTSC Department of Student Life to Campus Police to the Principal’s office, everything that I have been involved with on campus would not have been possible without the support of university administration,” says Sahagian.

For Sahagian, overcoming adversity and working to bring others forward has been a staple in her personal life, her parents and her grandparents.

Her grandfather, at the age of seven years old was one of the thousands to be deported from his home in modern day Turkey in 1915 of what was marked as the ‘Armenian Genocide’, making an arduous 100-mile trek to the nearest place of safety. Sahagian and her family watched as the 2011-2016 Syrian crisis escalated in their city, with increased tension and violence. Her father’s livelihood, his photography shop, would be destroyed during the crisis.

After arriving in Canada, Annie and her family sought ways to integrate into Canadian culture. When Carly and Annie began their academic life at UTSC, they would teach themselves how to become fluent in spoken English, a language that they were only familiar with through writing prior to leaving their homeland.

In Sahagian’s words, it’s been a wild ride.

“Its’s absolutely incredible that these two girls, who knew absolutely no one, could grow, learn and get to know different parts of the university body and then for me to be the person to bring greetings and tell my sister and my fellow students, congratulations – who would’ve guessed this would happen,” says Sahagian.

And who would’ve guessed that Sahagian’s second final academic year at UTSC and her sister’s final year would conclude during a global pandemic. It’s been more than two months since she has seen a friend in person due to COVID-19 physical distancing measures.

“I’m walking a lot,” she says, mentioning a daily path along Eglinton. This is one of the ways she’s maintaining her physical and mental health.

She laughs and mentions when growing up in Syria, sports education and physical health weren’t her top priorities, so the first steps and getting into the routine of daily walks was difficult at first. But it is important to find happiness and fulfillment within one’s self so we can uplift each other and impact others positively.

“When you just start something, start a new path and take those first couple of steps, it’s difficult.”

After she graduates in spring 2021, Sahagian wants to work in the media industry, uplifting others and sharing her story with the dream of hosting her own network show.

“I feel like a lot of experiences I’ve had will be helpful and give others the courage to share their own stories,” says Sahagian.

Other aspirations include becoming more active in politics in Canada, but overall, she’s excited to explore her options.

“Let’s see where life takes us.”

Read more about Annie and Carly's story from a 2018 story in UTSC Commons magazine.