Ukraine President Volodymyr Zelenskyy spoke to students at U of T and at other universities across the country at an event hosted by U of T (photo by Nick Iwanyshyn)
Article Date
Friday, June 24, 2022

Ukrainian President Volodymyr Zelenskyy told post-secondary students across Canada that Ukrainians are committed to fighting for their future, freedom and land as they repel Russian invaders from their homes.

“Ukraine and Russia are separated by a common border, but there is an abyss between us in actions, in words, and most importantly, in values,” he said at a recent event hosted by U of T President Meric Gertler and the Munk School of Global Affairs & Public Policy.

The event marked the second time U of T hosted President Zelenskyy after his visit in 2019 for an international conference on Ukraine’s future.

In his opening remarks, Zelenskyy addressed how drastically the country’s goals changed after Russia launched an invasion on Feb 24, wiping out much of Ukraine’s infrastructure and foreign investment capital.

“Today, we are fighting for the future of our children and grandchildren, for their life and opportunity to build a new Ukraine,” he said. “We will definitely win… for the sake of our peaceful, free and democratic future.”

University of Toronto Scarborough students had a chance to join an in-person viewing event in the Instructional Centre on campus. The event was attended by more than 45 members of the UTSC community, including students, staff and faculty. 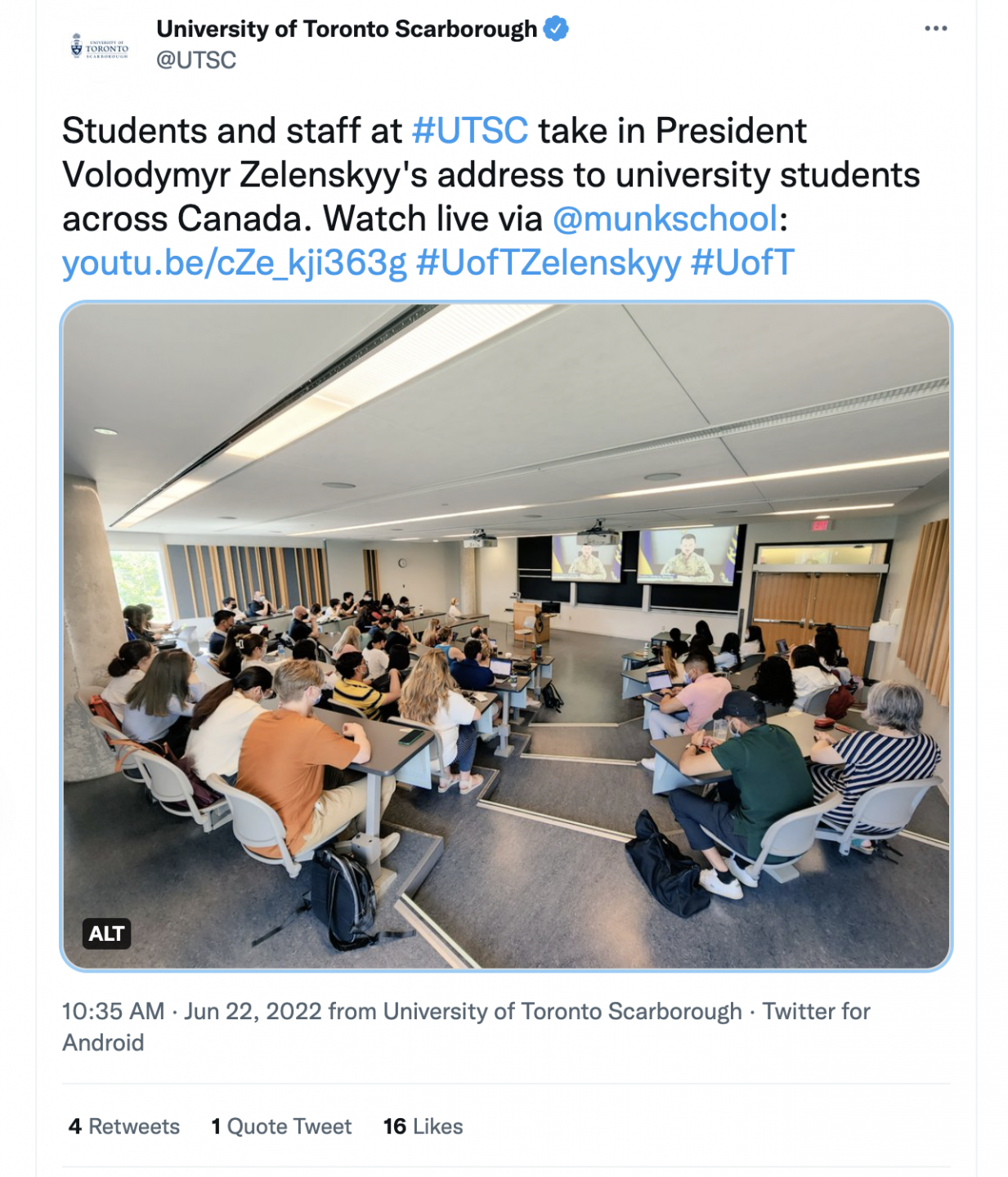 Zelenskyy delivered his speech virtually from Ukraine before taking a number of questions from students across Canada. Questions ranged from how social media shaped the war in Ukraine, his role models and why he pursued public service to how the government balances Ukraine’s safety and the nation’s security while maintaining democracy.

In response to the last question by U of T student Emma Patterson, Zelenskyy said that sometimes the war requires a rigid approach.

"In order to protect democracy and freedom in the country, sometimes, you have to go fast and non-democratic,” he said. “Unfortunately, there is no time for democratic tools such as discussions because time doesn’t count in seconds or minutes, but [in] human lives – the number of survivors and the number of dead.”

Quinn Rozwadowski, a student from the University of Saskatchewan, asked how people could fix self-centred nationalism and convince people in North America that democracy is worth fighting for, even if they are too distant from the war themselves.

“The war has no distance, we’re fighting for the same values that you have,” Zelenskyy said. He shared that Ukraine is protecting its right to choose how to live, which is one of the most precious things about democracy.

He added the entire world needs to respond to all atrocities in a rigid and united manner to prevent the same crimes from happening in other parts of the world.

River Hoffos, a student from the University of Alberta, asked President Zelenskyy how students in Canada can best support Ukraine.

“Canada is helping us as much as they can,” said Zelenskyy. “So it’s very important that you – students who are present here from different countries, would pass on this message to your respective countries to pressure your political management, to give Ukraine what it needs.”

He shared that Ukraine needs more weapons, financial support, humanitarian aid and sanction pressure on Russia. Zelenskyy added that students could help by attending rallies or through their social media by reminding people about what is happening in Ukraine.

We are fighting for the future of our children and grandchildren, for their life and opportunity to build a new Ukraine

“With your actions, please do not allow anyone somewhere on the hierarchy of bureaucratic corridors to forget about what’s going on in Ukraine, to forget about the war,” he said. “Please don’t become tired because of the war.”

Speaking at the event, Peter Loewen, director of U of T’s Munk School of Global Affairs & Public Policy, shared that with the support of a donation by the Temerty Foundation, the U of T is welcoming 100 students per term from the National University of Kyiv-Mohyla Academy. He also announced that U of T will bring up to 30 students from the Kyiv School of Economics this fall to study in the Munk School’s Master of Global Affairs & Master of Public Policy programs.

Zelenskyy said that he is extremely grateful for all the support that the Canadian government and all the universities provided to Ukraine and Ukrainian students, who received an opportunity to get new knowledge and experience.

He also encouraged all young people studying abroad to return to Ukraine once the war ends.

“Do come back with modern knowledge, and most importantly with the willingness to live and build independent Ukraine,” he said. “And we will defend Ukraine, I am sure.”

Anastasiya Gordiychuk is a reporter who was born in Ukraine. She recently graduated from UTSC journalism program.