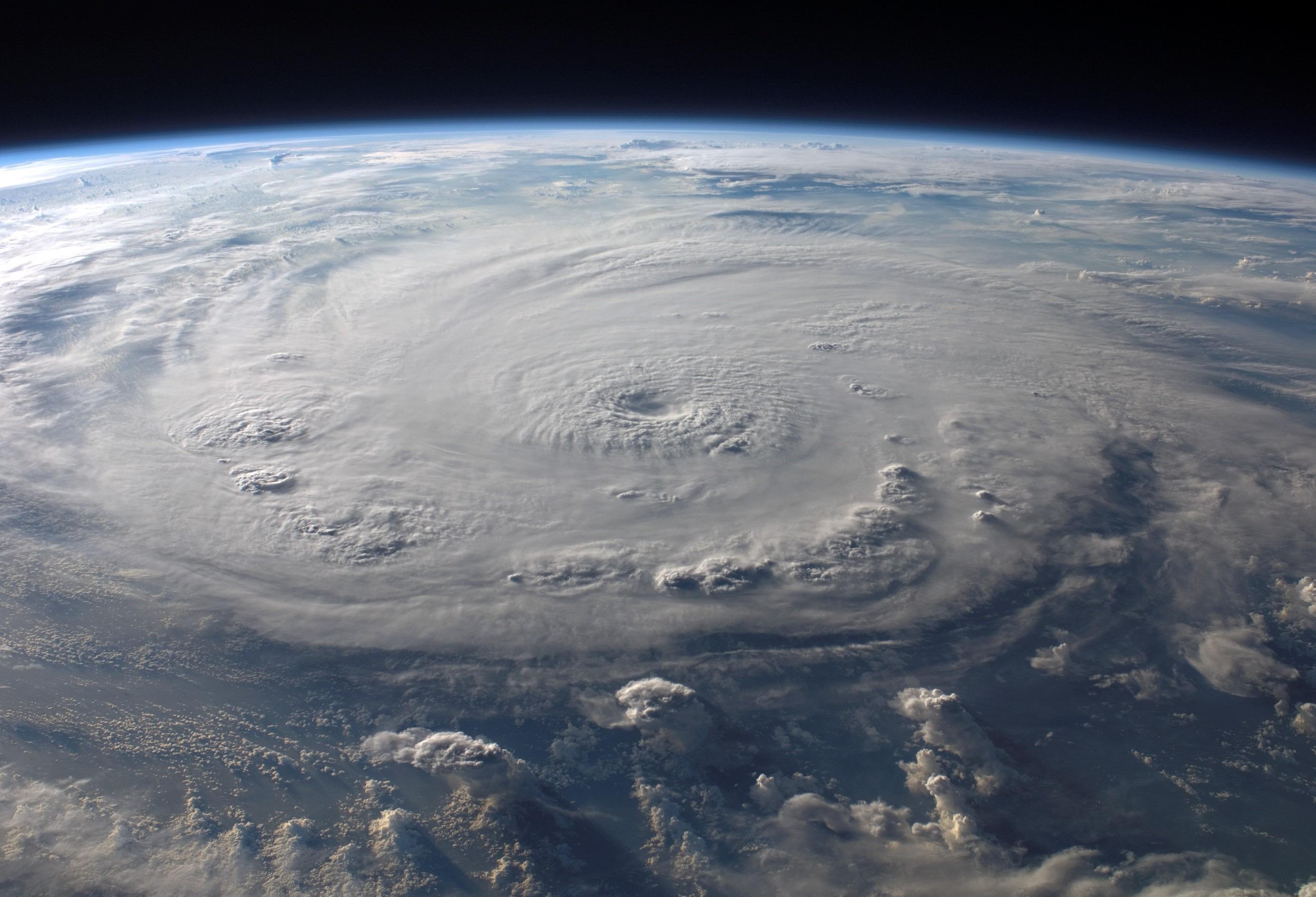 In a recent Washington Post story, U. S. Air Force General Joseph L. Lengyel, said he believes the world’s climate is changing and becoming more severe—with storms becoming bigger, larger and more violent. Senior officials around the world have echoed this view, while a few continue to question whether climate change is a hoax.

Athena Masson is a graduate student in U of T Scarborough’s Environmental Science doctoral program studying Atlantic basin hurricanes with a focus on how these storms are classified.

She sat down with her doctoral supervisor, Professor William Gough, to talk about how her research might help us better understand these increasingly frequent and intense storms.

WG: Athena, you’re developing a new—and improved—hurricane scale for the North Atlantic basin. Tell us why we need that?

AM: Since the 1970s we’ve used the Saffir-Simpson Hurricane Scale, which until recently focused on categorizing an approaching hurricane based on three measures: wind speeds, barometric pressure and estimated storm surge heights. In 2010 the Saffir-Simpson Scale was modified to include only the wind component, so when we say a hurricane is a Category 4 or Category 5, we’re only talking about the wind speed.

The National Hurricane Center dropped all of the requirements except wind to help reduce public confusion about the impacts associated with the various hurricane categories, and to provide a more scientifically defensible scale. But wind is not the only or even the main threat associated with hurricanes. My research shows that the Saffir-Simpson Scale should be improved to include other aspects of a storm so we can categorize the strength more accurately.

WG: Hurricanes, particularly those developing in the Atlantic have received considerable media attention this year. Compared to other years, is this year unusual?

AM: Compared to recent years the 2017 Atlantic Hurricane Season has been an active year in many respects, including the frequency of storm formation, major hurricane formation, and storms forming beyond the designated hurricane season—for instance Tropical Storm Arlene in April.

The amount of activity can partly be attributed to the warm sea surface temperatures maintained over the mild North American winter season. Also, a developing La Niña in the Pacific helped raise ocean temperatures in the Atlantic. That this is an active year should not be a surprise. The National Hurricane Center and other meteorological agencies called for an above average hurricane season this year because of these contributing elements, and warned about the possibility of both more activity and higher strength in the Atlantic Basin.

WG: There’s been much speculation about hurricanes and climate change. Can we just say that Harvey and Irma are a result of climate change?

AM: Hurricanes like Harvey and Irma are consistent with what we can expect in a warming climate. But it’s a bit tricky to say these storms are only caused by climate change. We are experiencing a slight positive trend in the frequency of tropical storms developing, but we are not yet seeing a change in their intensity—although it isn’t out of the question that elements including intensity, duration and size are on the increase. Satellite data is helping to us determine these factors.

The fuel for Atlantic basin hurricanes comes from heat stored in the upper levels of the Atlantic Ocean, Caribbean Sea, and Gulf of Mexico. Research in the UTSC Climate Lab and elsewhere has shown the sea surface temperatures in bodies of water have increased. The atmosphere is also changing, and these changes may be affecting the creation and development of hurricanes. My research shows a clear trend for more hurricanes making landfall than in the past, which is a serious concern.

WG: The images of the damage caused by Harvey, Irma and more recently Maria have been vivid and often shocking in their intensity. However, I’ve heard some news reports say that the 1930s had stronger hurricanes that had more impact, and that this also happened in the early 1900s.

AM: There are two significant storms that are used as textbook meteorological events from those time periods: the 1935 Labour Day Hurricane, and the 1900 Galveston Hurricane. In both cases, there was significant impact in terms of human life and property damage. Weather forecasting in those decades was not as developed as it is today, so there was no real ability to issue advisories to help people prepare. The Galveston Hurricane hit Texas on September 8, 1900, with minimal warning. An estimated 6,000 to 12,000 people died, making it the deadliest hurricane to hit the U.S.

It’s also estimated that three major hurricanes (Category 3 and higher) made landfall in the United States in 1935. The so-called Labour Day Hurricane may have been the most intense on record to make landfall when measured by pressure.  That storm took a similar path as Irma, and went up the west coast of Florida.  But it was smaller in size. We didn’t have satellite data then, but we did create weather charts to outline how big storms were by measuring their pressure. Irma was substantially larger especially when it hit northern Florida.

WG: You mentioned that there was “minimal warning” for the 1900 Galveston hurricane. Why was that the case? After all, hurricanes are not small weather phenomenon like tornadoes are.

AM: This is a critical point in comparing hurricanes today with those in the past. Today we have warnings, on the order of days and sometimes over a week in advance, as we did with Irma and to a lesser extent Harvey. Weather satellite technology was developed in the 1960s and since the 1970s, hurricanes have been forecasted and tracked with a fair amount of accuracy from their genesis to landfall. Today, aircraft provide more detailed information prior to landfall. Hurricane modeling also allows us to provide warnings to potentially affected regions.

So before the 1970s, the strength of hurricanes was not as precise as it is today. That means we don’t really know if hurricanes in the early part of the twentieth century were stronger than they are now. We’ve labeled the 1935 storms as major category hurricanes, but this is an estimate.

Before satellite technology, meteorologists relied on ships relaying information about storms and their intensity, based on barometric pressure. Caribbean Island nations would pass on information from island to island to warn one another of an approaching storm and the possibility that it may be heading towards a particular town. Obviously by the time this information was received many residents would potentially only have a day to prepare or even evacuate.

WG: Why not determine the strength based on the damage done or number of fatalities?

AM: The 1900 Galveston Hurricane was devastating by these measures. If there had been warnings like there are today however, most of the fatalities could have been avoided by evacuation. And we’ve learned from past experiences. Building codes have been updated—that was an important lesson following Hurricane Andrew in 1992. This year many more buildings in the Florida Keys withstood Irma’s onslaught.

Also, Atlantic-based hurricanes often impact developing countries in the Caribbean and Central America where housing structure and building criteria differ. Some nations are better equipped to withstand extreme hurricane force damage and this is reflected by lower fatality rates. Basing a hurricane’s strength on damage and fatality numbers isn’t an accurate measure of the actual strength of the storm – there are many other factors involved.

WG: Thanks for sharing your expertise. I have to ask—since you’re from Florida, have you experienced hurricanes?

AM: I’ve been through many hurricanes, including Andrew in 1992, Matthew in 2016 and now Irma. Each hurricane is unique in its strength and impact, and each one teaches us a lesson. Andrew demonstrated that size does matter with hurricanes. Andrew was a small hurricane size-wise, but it devastated South Florida with powerful winds and its destruction was similar to that of a tornado. Matthew showed the features of a water storm – the force of the ocean and the storm surge a hurricane can produce even if the eye of the storm remains offshore. Irma exhibited a combination of wind and surge.

A hurricane is not just one threat, but many threats in one formidable package. They will continue to happen, possibly becoming more frequent or even more severe due to climate change. While we can’t stop this incredible atmospheric force, we can and should learn how to adapt to approaching hurricanes. First, we need to analyze hurricanes by more than just maximum wind speeds because as many Floridians and Texans are now aware, it was not wind that brought damage, it was a combination of wind, water and speed. A hurricane scale that accurately addresses these components will improve our understanding of the nature of individual storms, and that will help us save lives, property and resources.