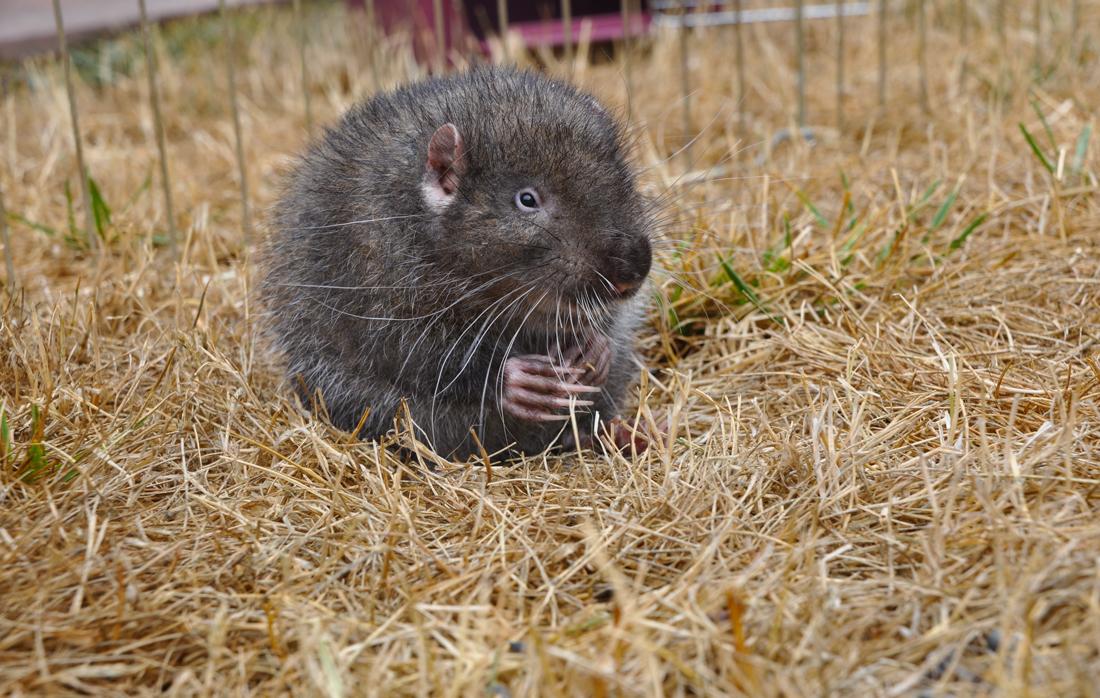 The mountain beaver (not to be confused with the North American beaver) is native to the northwestern U.S. and southern British Columbia, particularly the Cascade Mountains. (Photo by John M. Regan - Northwest Wildlife Online)
Article Date
Wednesday, June 27, 2018

New U of T Scarborough research has found that the ancestor of the modern day mountain beaver had a larger relative brain size.

The study, which is published in the journal Palaeontology, offers a rare case of an animal’s brain becoming smaller relative to its body size, likely due to a change in its lifestyle over time.

The mountain beaver (Aplodontia rufa) is a rodent that’s adapted to burrowing, meaning it lives mostly underground in tunnels dug deep into the soil. But fossil records show that its 30-million-year old ancestor was better adapted to living in trees, similar to squirrels.

“Early squirrels and the mountain beaver’s ancestor had a similar, relative brain size,” says Ornella Bertrand, a postdoctoral fellow in the Department of Anthropology at U of T Scarborough and lead author of the study.

But something happened over time. While the mountain beaver can climb trees like its ancestor and squirrels – albeit likely not as well – they rarely travel too far from their burrows and are mostly nocturnal. As a result of mostly living underground and being less reliant on their vision, it appears an area of the neocortex responsible for sight may have shrunk over time.

“The brain is metabolically expensive, meaning it needs a lot of food energy to function,” says Bertrand, whose research focuses on the brain evolution of mammals. “So the parts of the brain that are not crucial for survival might have been selected against.”

Bertrand and her team compared virtual endocasts — the imprint the brain makes against the inner part of the cranium — and found that it may have been the part of the brain related to sight specifically that shrunk over time.

“There appears to be a relationship between being arboreal – that is living in trees – the size of the neocortex and strong vision,” says Bertrand. She adds that over time as the modern mountain beaver relied less on its vision, its neocortex decreased in size as a result.

While the modern mountain beaver actually has a larger overall brain size compared to its ancestor, it has a smaller brain relative to its body size, notes Bertrand.

As for when this change began to take place, it’s likely too hard to tell at this point. “It’s difficult to pinpoint when the relative size of the brain started to decrease since we only have three specimens to go by,” she adds.

Mountain beavers are native to the northwestern U.S. and parts of southern British Columbia, particularly in the Cascade Mountains. Large by rodent standards – averaging about 500 to 900 g and between 30 to 50 cm in length – they’re not closely related to the North American beaver.

In fact, despite superficial similarities in facial appearance and the fact they prefer moist habitats and eat tree seedlings, unlike North American beavers they have small, stumpy tails, and they don’t chop down trees, build dams or live in lodges. The mountain beaver is also considered a vulnerable species because its habitat in many places has been reduced.

The research received funding from an NSERC Discovery Grant, a U of T School of Graduate Studies Travel Grant, and a Research Expenses Grant from U of T’s Department of Anthropology.