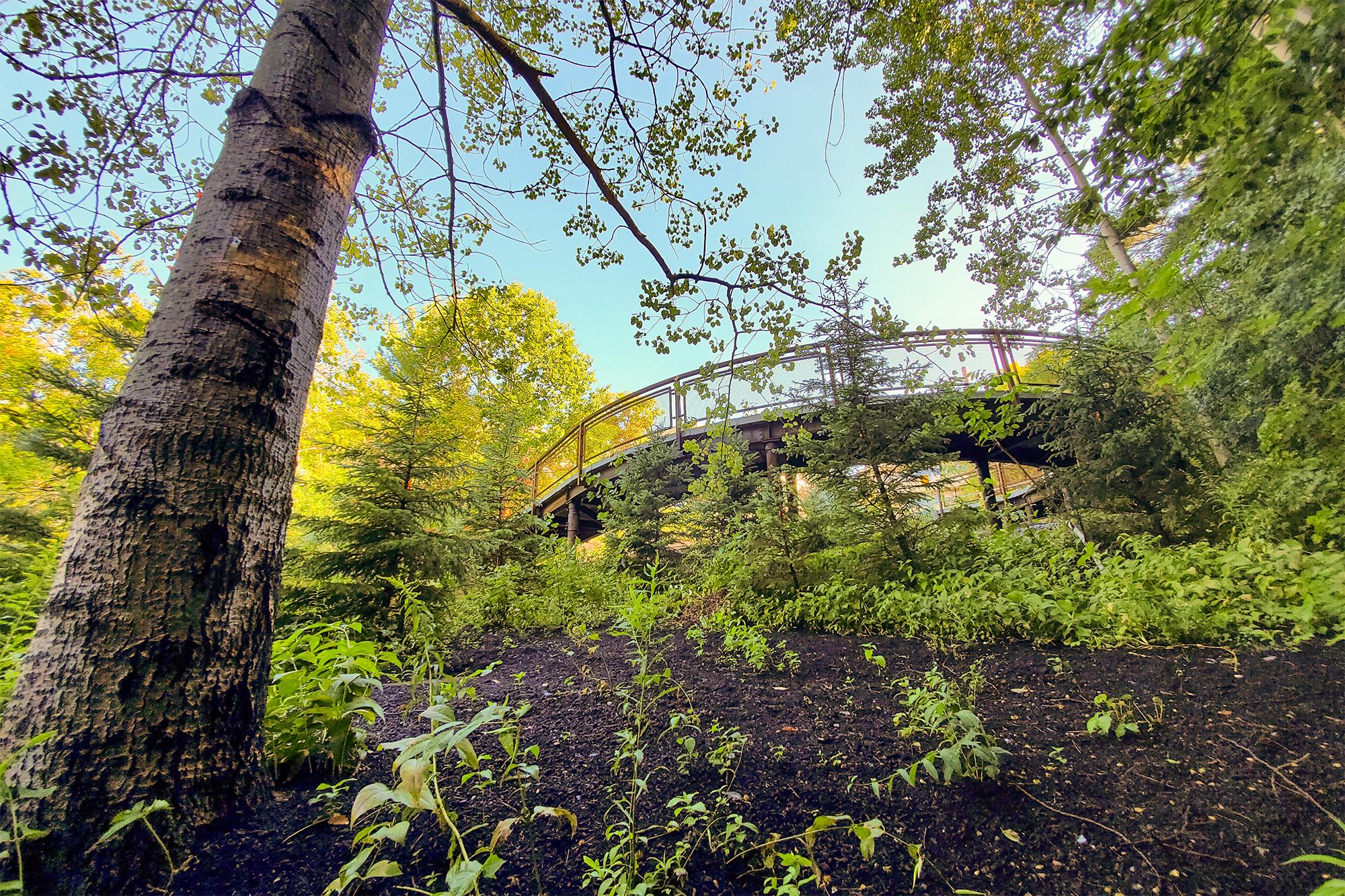 A guided tour of the trees along the Valley Land Trail is one of two sustainability projects coming to campus this fall (Photo by Don Campbell).
Article Date
Tuesday, April 19, 2022

U of T Scarborough will soon have QR codes throughout its forested trail and a store where everything is free, thanks to two award-winning sustainability initiatives.

UTSC Parks Canada, a club dedicated to exploring national parks, is creating an interactive walk through the Valley Land Trail, which connects the campus to Highland Creek Valley. Vinyl signs with QR codes will stand in front of 25 different tree species, linking to written and audio profiles with each tree’s historical, cultural and research significance.

“Coming out of the pandemic, I think we’re all just a little disconnected from the spaces around us,” says Ayuni Weerakoon Ratnayake, president of UTSC Parks Canada. “It’s important to highlight that relationship, and that as we study on this land, we’re connected to the natural environment around it.”

The course that inspired the initiative will also help create it. Titled Supervised Introductory Research in Biology, it includes an in-class project that has students gather information on local plants.

“That course was wonderful for breaking down the green barrier, where you’re not familiar with what plants are but you can tell everything is of nature,” says Devlin Grewal, who acts as the club’s vice-president and took the class last summer.

Ayuni Weerakoon Ratnayake (left) and Devlin Grewal are leaving their mark on campus before graduating this summer (Submitted photo).

UTSC Parks Canada teamed up with the course’s instructor, Ivana Stehlik, associate professor, teaching stream in the department of biological sciences, to develop its pitch for the grant. Students taking the class this summer will work on writing (and potentially narrating) the trees' profiles.

“It’s going to be a learning experience outside the classroom so people can go interact with the information out there in a physical space,” says Ratnayake, who is finishing a double major in human biology and molecular biology.

The group chose trees that have rich backstories and can be seen and scanned while staying on the trail. Birches, hemlocks, oaks and walnuts are all on the list, which Grewal says “filled up fast.”

“We all have a strong passion for the outdoors and getting knee deep in nature,” says Grewal, soon graduating with a specialist of integrative biology. “We’re hoping to bring a little of that excitement and joy to the campus, and to give students the opportunity to spark some passions and have a good time outside while they’re doing it.”

Buyers beware — wallets won’t be needed at the upcoming free store led by Regenesis UTSC, a student group that launches environmental initiatives. Donated items will be collected from the campus’ lost and found, residences and community members, along with local charities, then offered at no charge.

“We thought having a spot on campus where people can get things that might be difficult to reach otherwise, as well as helping to reduce some of the waste in the community, would be a good idea,” says Yao Yan Huang, president of Regenesis UTSC and fourth-year environmental chemistry student.

The group is working to secure a space for the store and aims to host a pop-up in September, with full operation slated for January 2023. Organizers are also looking at an appointment-only based model to adhere to pandemic restrictions.

Huang says donations will be a “two-way street” between local charities, with items donated to and collected from organizations based on what’s received. The group also hopes to create opportunities for students, including volunteer roles to operate the store and a work-study position to co-ordinate it.

While the campus did have a free store, it was open only to students living in residence and closed entirely during the pandemic. Regenesis UTSC wants its edition to be available year-round to members of the U of T and local communities.

“I'm hoping it brings more awareness about waste and the way we use items in our day-to-day lives. There's a lot of excess in our culture,” says Huang. “We can use the idea of a circular economy, that things don't have to be going from consumption to waste, that they can have a longer lifespan and be reused.”

The group is a chapter of Regenesis, a larger non-profit that began at York University. York recently hosted a retreat for its branches, which included a visit to its own free store and borrowing centre, where items such as board games, sports equipment and kitchenware are rented for free and returned after one week. Regenesis UTSC hopes to expand to offer something similar.

“This was a great example of something that could be useful to bring back to UTSC,” Huang says. “Donated things have history in them and getting to take them home for free is really exciting for us.”