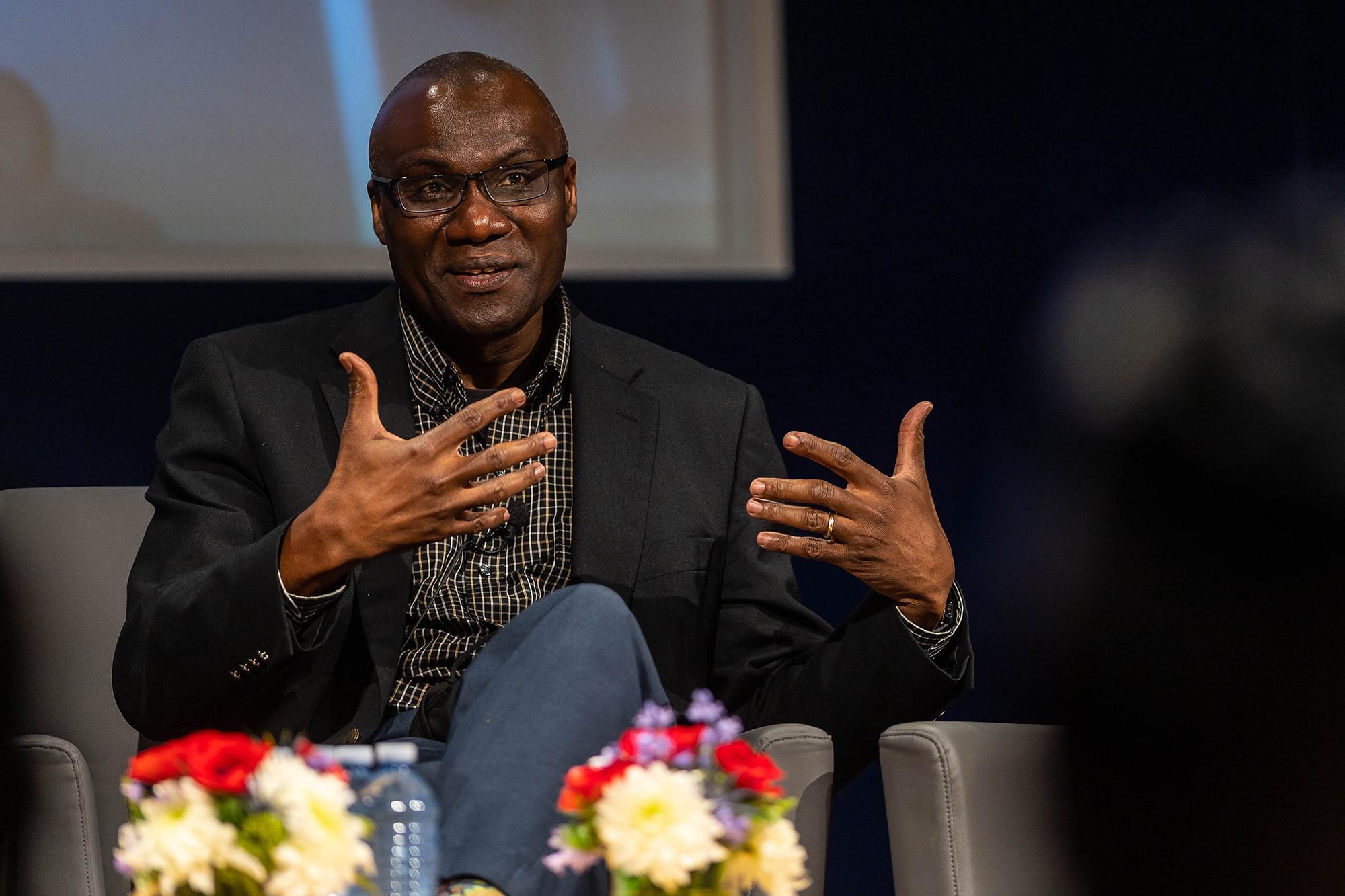 Wisdom Tettey, vice-president and principal at U of T Scarborough, was a panellist at an inaugural event for schools that signed the Scarborough Charter (Photo by UBC).
Article Date
Wednesday, May 18, 2022

Canadian universities and colleges that signed the historic Scarborough Charter are looking at ways to support Black flourishing across Canada.

“The opportunity to flourish, thrive and to be successful is very much tied into the success of our institutions,” says Wisdom Tettey, chair of the Scarborough Charter’s steering committee and vice-president and principal at U of T Scarborough.

It’s been six months since about 50 universities and colleges across Canada signed the Scarborough Charter, a series of commitments to fight anti-Black racism and further Black flourishing in higher education.

The University of British Columbia (UBC) recently hosted an inaugural forum that brought signatory schools across Canada together for the first time. UBC also teamed up with Simon Fraser University (SFU) to host a closing symposium, titled Community Making and Black Flourishing Through the Scarborough Charter. Panels were open to the public in-person at UBC and via livestream.

“The fundamental goal was to make sure people could see the relevance of the charter in their everyday life,” Tettey says. “A core part of the charter is continuing to have this work be informed, shaped and co-created by communities.”

Panels were hosted on a stage at UBC at the Scarborough Charter's first symposium (Photo by UBC).

In one of the event’s four panels, undergraduate and graduate UBC and SFU students shared their experiences navigating university and discussed ways to create a new supports for Black students. Another panel had activists speak on ways academic institutes can connect with Black communities.

Panellists highlighted white supremacy in higher education as a major obstacle to Black flourishing. Several mentioned that Black people must fight to have schools acknowledge the systemic barriers they face.

“You need doors open, you need to address what is referred to as gatekeeping, and that gatekeeping is shaped by deficit thinking, by the tyranny of low expectations and by denying the value and humanity and dignity of Black folk,” said Malinda Smith, associate vice-president research (equity, diversity and inclusion) at the University of Calgary and member of the Scarborough Charter's steering committee.

In a panel with Tettey, Smith noted that because higher education institutions were built to cater to white people, being included in them in their current state isn’t the goal.

“The Scarborough Charter is helping to transform how we think about our institutions, which means our institutions cannot remain the same,” Smith said. “They have to be changed so we’re not being added into structures of oppression, but we are there to transform them.”

She also spoke on widespread underrepresentation in Canadian universities and colleges, and mentioned that many Black students will complete their entire education without having a Black professor or senior role model.

“We know that to be one, you have to see one sometimes,” she said of role models.

Several panellists shared their personal experiences with racism and exclusion in higher education. Tettey says these stories don’t challenge the charter’s success — they’re an integral part of its journey.

“As we share our collective successes and the progress that we're making, it's important to subject those to critical review by the folks that we claim we're doing this for, because they are our best peer reviewers,” he says.

Tettey and Smith were co-panellists for a discussion on why a charter should be used for Black representation and inclusion. Smith opened by noting the charter was created during a global time of racial reckoning in 2020, but added that the work began “long before it became visible.” Many of their contributions, she added, have historically been erased or hidden from the public record.

“That moment of racial reckoning wasn’t just an ‘aha’ moment,” she said. “It emerged after decades of Black advocacy, a long durée of struggle, particularly led by Black students.”

Tettey (right) and Smith (middle) were on a livestreamed panel moderated by Annette Henry (left), professor in the department of language and literacy education and institute for race, gender, sexuality and social justice at UBC (Photo by UBC).

Smith and Tettey’s panel was dedicated to answering virtually submitted questions from the audience, beginning with one asking whether the charter would be used to establish field schools with universities and colleges in Africa. Tettey clarified the document is meant to guide and support institutions, not to replace them.

The charter does include a commitment to encourage programs in Black and Black Canadian studies, and to promote curriculum that includes Black expertise and knowledges. But the charter doesn’t dictate how to achieve those commitments; it establishes them as goals while the Inter-Institutional Forum offers members mutual help in reaching them.

“There's a mechanism that allows us to come together, but the Scarborough Charter is not where the responsibility lies. It lies with our individual institutions,” replied Tettey. “But we are providing a network that allows you to work with others across the country to enable these opportunities at scale.”

Smith mentioned the range of African and Black studies programs offered by the charter’s signatory schools, some of which are decades old. The network allows institutions to not only connect on those programs, but consult with schools that may offer insights on how certificate and minor programs could become pathways to PhDs.

“There’s all kind of opportunities, and that’s an important aspect of the charter. Opportunities and possibilities that might not previously have been imagined,” she said.

Another question asked how the charter would engage more universities in Quebec. Tettey said that effort is ongoing, adding that the approach is the same for institutions across Canada: work diligently and collaboratively to bring them into the fold. Previously in the panel, Smith acknowledged that Adelle Blackett, principal drafter of the Charter, is also a full professor and Canada Research Chair in transnational labour law and development at McGill University in Quebec. Blackett is a key connection between the charter the province, as Smith is for Alberta.

Tettey said every institution has its own character and autonomy that should be respected — and noted that schools need to show commitment before signing. An institution must have truly accepted it needs to take steps toward equity to be ready for the work of the charter, he said.

“The work needs to be sustained and if you don't build a strong commitment at the institutional level, this will fizzle,” Tettey told the crowd.