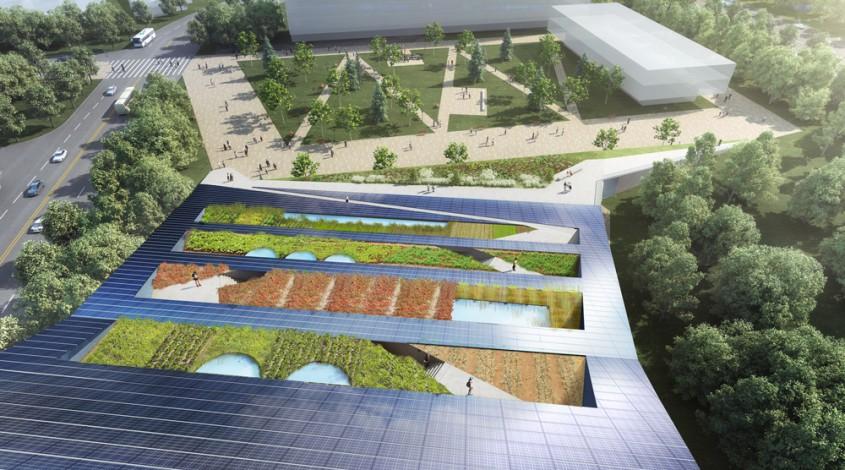 In February, U of T Scarborough issued a request for proposals on what university officials say will be one of Canada’s most ambitious environmental building projects. A student residence with 747 units will be designed according to “passive house” principles — a German design standard that features thick, insulated walls, triple-glazed windows and various energy recovery systems. To be completed in about three years, it is expected to use about 90 per cent less energy than a comparable structure.

The residence is just one of 14 building projects in a master plan that will physically transform U of T Scarborough over the next decade, especially north of Ellesmere Road. With a combined capital investment of $979 million, the plan is projected to generate an estimated 2,000 new jobs at U of T Scarborough and in the vicinity, as well as millions in tax revenues. It also aims to position the campus as the focal point of an economic development cluster in the eastern GTA, to be dubbed EaRTH District and modelled on the MaRS Discovery District downtown.

The goal, says U of T Scarborough Chief Administrative Officer Andrew Arifuzzaman, is to position a partnership between the campus and Centennial College as a “catalyst for a cross-sector collaboration” that will attract students, entrepreneurs and innovation-driven firms in sectors such as cleantech, advanced manufacturing and next-gen agriculture. The stakes are huge, extending well beyond the campus. “What role can a major institution play in revitalizing an economy?” he asks. “That’s the big mega-question.”

According to a 2019 assessment of the potential social and economic impact of the EaRTH District, a focused strategy could generate a cumulative $6.6 billion in output from post-secondary institutions, research and industrial activity between 2025 and 2040, as well as 3,400 direct jobs (by 2040) and over 2,000 students enrolled in cleantech-related disciplines between U of T Scarborough and Centennial.

The opportunity, university officials say, is linked directly to prevailing commercial and industrial conditions in eastern Scarborough and Durham Region. Over the past several years, manufacturing has abandoned this corner of the GTA; the shuttering of General Motors’ Oshawa assembly plant is the latest and most visible example. Education levels in the area are high, but Scarborough is estimated to have 75 per cent fewer businesses than the rest of the city on a per capita basis. Today, only two per cent of the city’s manufacturing firms are located here.

This leaves the area with an abundance of serviced but fallow industrial land, as well as port, rail, regional transit and highway access, and also with inexpensive housing — at least in comparison to the rest of the city. “It has great potential for stimulating green tech and innovation,” says Jennifer McKelvie, city councillor for Scarborough-Rouge Park, and a U of T Scarborough environmental studies graduate.

Another economic development study, conducted in 2018 by N. Barry Lyon Consultants (NBLC) and commissioned by U of T Scarborough, pointed out that the campus master plan can accommodate retail and commercial uses, as well as a conference centre and hotel. NBLC President Mark Conway says the plan to add facilities for startups, coupled with a stream of graduates from disciplines such as environmental sciences, will position U of T Scarborough as a magnet for new investment in this extended area. “Every university worth its salt has some kind of innovation campus attached to it.”

“Every university worth its salt has some kind of innovation campus attached to it.”

The planned development of the campus is a necessary piece of the EaRTH District economic development cluster. But on its own it isn’t sufficient. Conway and others point out that improved rapid transit access to the campus is critical. It will allow U of T Scarborough and adjacent facilities for startups to be better integrated to the rest of the region. “Public investment at this scale would make the argument for private investment more compelling, assuring the development of a vibrant community hub in Scarborough,” NBLC’s report notes. Such infrastructure would also alter land economics, Conway adds. “That’s the most important element.”

Inter-institutional collaborations, in turn, will produce new synergies. A partnership between Centennial College and U of T Scarborough, initially proposed about two years ago, represents a concerted effort to create a flow of graduates with a wide range of technical and research skills in fields such as agriculture, clean building technology, robotics and environmental science. “Now you have the pipeline,” observes Andrew Petrou, Centennial’s director of strategic initiatives and external relations.

Research and innovation spaces on campus — the 2015 Environmental Science and Chemistry Building, as well as a pair of proposed new buildings for cleantech training, research and innovation — will provide state-of-the-art venues for students, academics and startups gravitating to these fields.

The next phase, now in the planning stage, is the development of an advanced agriculture hub, which will focus on the design and construction of what’s known as a “vertical farm.” Petrou notes that when the request for proposals for this project was made public earlier this year, the documents were almost immediately downloaded by dozens of prospective partners.

The project dovetails with culinary arts programs at both U of T Scarborough and Centennial, but that’s just the start. Arifuzzaman says the vertical farm will attract investors and entrepreneurs who are looking to test new growing technologies with smaller physical and carbon footprints — increasingly important in future decades for sustainable food production. “The idea is to create and refine agricultural technologies that can be used around the world.” He predicts that the vertical farm will become a “living lab” as it takes shape over the next five to six years.

“The idea is to create and refine agricultural technologies that can be used around the world.”

Another element of the EaRTH District economic development strategy is for U of T Scarborough and Centennial to partner with builders and construction-materials firms to attract companies interested in manufacturing modular building components. With the GTA housing and condo market showing no signs of slowing, Arifuzzaman says interest is growing in the use of less expensive prefabricated components, such as wall assemblies. (These can reduce construction times, improve energy efficiency and create cleaner building sites.)

While long-term growth projections from the economic development studies are impressive, the EaRTH District plan clearly turns on the ability of local and regional governments to attract investors to locate in the area. “It’s not just for academics,” says Andrew Petrou. “It’s for the community.” Indeed, municipal economic development officials in Scarborough and Durham are gearing up to work with the two post-secondary institutions. The goal: to bring cleantech, agriculture and advanced manufacturing businesses to the region, creating a cluster of businesses with ties to both post-secondary institutions.

The 2019 report, which was commissioned jointly by U of T Scarborough and Centennial, says the EaRTH District “will help to address the skills gap that exists by providing an education and training platform aligned with industry demand. The goal is to foster economic development opportunities in new and emerging industries that are expected to materialize as a result of this initiative.”

The EaRTH District “will help to address the skills gap that exists by providing an education and training platform aligned with industry demand. The goal is to foster economic development opportunities in new and emerging industries that are expected to materialize as a result of this initiative.”

Within the large geographic area that makes up the eastern GTA, U of T Scarborough and Centennial officials have identified a swath of industrial land near the campus, north of Highway 401, as a potential destination for the types of firms identified in the EaRTH District plan. Even more significant is a large tract of city-owned land immediately north of the Toronto Pan Am Sports Centre, a former landfill site that buffers the campus from the highway.

The City of Toronto’s land company has considered various ideas for this site, including a maintenance facility for transit vehicles. But university and city officials have been quietly discussing the possibility of transforming it into an innovation campus for the EaRTH District cluster plan.

In fact, the prospect of a deal surfaced during a January session of city council’s economic development committee, as senior U of T officials briefed politicians and staff about future growth plans for both the St. George campus and U of T Scarborough. Committee Chair Michael Thompson, a veteran councillor for Scarborough Centre, asked if the university had designs on the property. “Yes,” replied U of T Vice-President and Provost Scott Mabury, “we’re interested.”

The property’s strategic location — close to both the 401 and the campus — will make it an attractive venue for investors and startups, Arifuzzaman says, although he notes that the property would require extensive remediation.

Ambitious though they are, such plans can fall victim to field-of-dreams thinking. Build it and they will come, as the saying goes. But the two economic development studies and university officials point out that cleantech will become a growth sector in coming decades, as governments confront the accelerating climate crisis.

What’s more, there’s plenty of evidence that economic cluster strategies focused on post-secondary institutions and collaborative relationships with government and the private sector can produce impressive results. North Carolina’s Research Triangle Park is one example. Another, much closer to home, is the artificial intelligence hub that’s grown rapidly around university researchers and the Vector Institute, in downtown Toronto’s MaRS Discovery District.

As it takes shape and begins to generate dividends, the EaRTH District strategy will create what Arifuzzaman envisions as a “spectacular” economic and institutional centre in a corner of the GTA that many Torontonians drive through but don’t really know. In his words, “it should be looked at more like a front door to a new future than a back door to an old past.”

“it should be looked at more like a front door to a new future than a back door to an old past.”