Having to flee their homeland was all too familiar for Carly and Annie Sahagian’s family. Since coming to Canada from Syria, the two sisters have never stopped giving back

The First World War is in its eighth month, but in the Ottoman Empire another nightmare is just beginning.

On April 24, 1915, Ottoman authorities round up and arrest thousands of Armenian community and intellectual leaders in what is now Turkey. They will be taken to holding centres, and then killed. Men are massacred or die from forced labour. Women, children and the elderly are deported, accompanied by military escorts who deprive them of food and subject them to further violence.

A seven-year-old boy, Karnig Sahagian, is among the thousands who are deported and who make an arduous 100-mile trek to the nearest place of safety. After several days, he and his mother arrive in Qamishli, a city in the northeast of Syria, where Karnig will grow up and have children of his own.

“They called it a death march, that walk through the desert,” says Carly Sahagian, a U of T Scarborough student and Karnig’s granddaughter. “That was only 100 years ago, not that far removed.”

The spirit of surviving that march has been passed on to Karnig’s children and grandchildren, including Carly, who is a fourth-year molecular biology and gender studies student, and her younger sister Annie, a third-year student majoring in media studies and gender studies. “We still have the spirit of that strength,” says Carly. And they have channelled that strength into surviving their own experience in a country in crisis. We’re in a small café — where they’ve already discussed their drink orders in Armenian — as they tell their story. Like their grandfather before them, they’ve had to leave the only home they had known.

In the Syrian city of Aleppo, Carly and Annie enjoyed a childhood of studying, going out with friends and spending time with family, including their younger sister and brother. Their father worked as a photographer in Aleppo — a talent he inherited from his father, Karnig. Their mother, formerly an agricultural engineer, is now a full-time homemaker.

Both sisters talk about growing up as Armenian Christians side by side with Arab Muslims, speaking Arabic and Armenian and living in peace. Life was simple … until it wasn’t.

“We were at school, and I was in 11th grade,” says Carly. People were going into the streets, peacefully demonstrating. “It was exciting, because we also wanted some change.”

In December 2012, peaceful protesting abruptly shifted to violence when car bombs detonated in the streets of Aleppo. Carly was in class, and she remembers her teacher explaining away the noises by saying that a building fixture might have fallen.

News of many casualties soon dispelled that speculation. When their father arrived to take them home, it was clear that something was terribly wrong. Carly was in a panic. Her legs were shaking so badly that after getting home she couldn’t stop the trembling enough to go up or down stairs. “This was the day that changed everything,” she says.

The explosions were a cog in the complicated wheel of the Syrian crisis, a conflict the family would live through for five years.

Basic needs were no longer met. Civilians had little to no power, water, heating or fuel, and no access to news or the internet. Yet life went on. Even when rebel forces hurled bombs at the University of Aleppo. Even as friends, and friends of friends, died or found themselves caught in the crosshairs of explosions, pieces of metal left embedded in their skin.

“It was hard to see our country go through war,” says Carly. “We’d seen a lot of the Iraq War on TV, but we never thought we would actually be in a war in Syria.”

The Sahagian children read by flashlight and found ways to keep up with their studies. “You had to continue your life,” says Annie.

That was until their father’s photography shop was destroyed by rebels and the family’s livelihood was gone. As violence continued to escalate, the Sahagians, like many other Syrians, fervently accelerated their search for a way out.

They consulted family abroad, including an aunt who lived in Scarborough, and the decision was made — the Sahagians would go to Canada. After months of preparing, they boarded a flight. Following a stop in Lebanon, they arrived in Toronto on January 29, 2016. 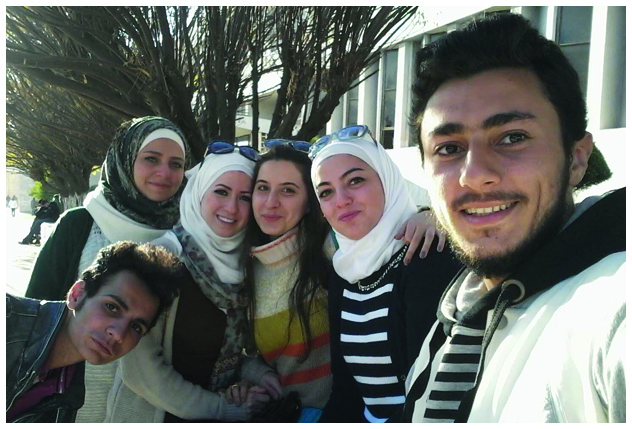 They were among thousands of Syrian refugee families to arrive in this country through private and government sponsorship. Like others, they were eager for a new start. A community centre for newcomers, where volunteering was greatly encouraged, served as a launching point for Carly and Annie to learn more about their new home. “It was about seeking opportunities to help us integrate with the Canadian culture,” says Annie.

Once situated with family in Scarborough, the two girls immediately began to look into post-secondary opportunities. After pulling up a map and looking around the city, they quickly decided to apply to U of T Scarborough, but they were lost and didn’t know how to get started.

“We came to the admissions office and one of the senior recruitment officers, Lindsey Andrew, helped us apply for school and financial support,” says Carly. “We are forever grateful to her.”

That interaction inspired both sisters to volunteer in the admissions office, and later to work part time as student recruitment assistants. “We work with many international and domestic students that were just like us — lost and longing to get into U of T,” says Annie.

In the café, Carly comes back to the table with her berry fruit smoothie and Annie’s almond latte. After a few sips they talk about their volunteer activities. The list is dizzying — over a dozen committees, organizations and initiatives, including Human Concern International, and, specific to the university: the Biology Students’ Association (BIOSA), Orientation Frosh Team, Student Ambassador Volunteer Program, International Students Association, Women’s and Trans Centre, Campus Council and the School of Continuing Studies. In most cases, both sisters volunteer.

“What drives a lot of my involvement is the opportunity to meet as many people as possible, to have fun and share conversations that let me go home satisfied thinking that ‘today I have influenced someone’s life,’” says Annie. 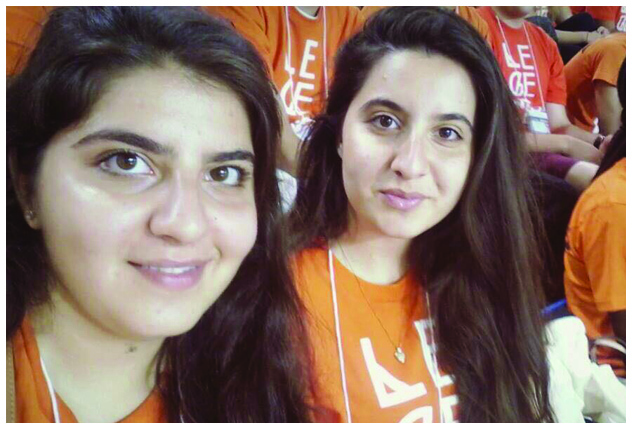 The sisters have done award-winning work in Armenian organizations on and off campus. Both participate in the Armenian Students’ Association and the Syrian Refugee Association at U of T Scarborough. They also volunteer at the Armenian Relief Society, a United Nations non-governmental organization. And both work in the Toronto Chapter of the Armenian Youth Federation of Canada, where they contribute to public awareness campaigns on topics such as the Armenian Genocide. (The Genocide is unrecognized in some countries. But April 24, the date of the initial round-up and arrests in 1915, is officially designated in Canada as Armenian Genocide Memorial Day.)

In class, Carly and Annie are inspired by new ideas and possibilities. “I never would have thought of anything like media studies or women and gender studies,” Annie says.

“We’re both getting exposed to these different concepts and how they intersect,” says Carly.

The sisters say time management is key for getting their work done. “You need to know your priorities,” says Carly. “I write everything in my agenda because there are too many things to do.”

This bustle of activity is new, they say; it began as part of their campus life at U of T Scarborough. “I never experienced this back in Syria,” Carly says with a laugh.

As our time comes to an end, the sisters talk optimistically about their futures. Carly is considering work with the UN, and Annie is looking into media production.

Buzz in the café increases, as more people come in at the end of the work day. Annie’s empty mug sits on the table. Carly, smoothie in one hand, pulls out her phone to plan their route back home to Scarborough. They chat briefly before turning back to me.

“The crisis taught us how to value little things in life that you take for granted,” says Annie.

This, like their grandfather’s strength of spirit, guides them in all they do.