Prime Minister Justin Trudeau encouraged a group of Grade 9 girls to let nothing stand in their way of pursuing studies in science, technology, engineering and mathematics (STEM).

“Girls can do anything,” said Trudeau in a recorded video to the group of over 100 students gathered at U of T Scarborough as part of Math in Motion … Girls in Gear!

“Everywhere in the world, women are changing the game in math and science, including as mentors who are here today. If they can do it, so can you.”

Trudeau’s greetings preceded Minister of Science Kirsty Duncan’s keynote address at the annual one-day conference aimed at encouraging girls to continue studying mathematics in high school so they can pursue STEM-related programs at the post-secondary level.

The conference features mentorship from women working in STEM industries, hands-on-activities, breakout sessions and talks. Over 100 girls from the Durham, Toronto and York region school boards participated in this year’s event.

Two of the organizers and founders of the event are Judy Shanks, U of T Scarborough alumna and Durham Region high school math teacher, and her former instructor, U of T Scarborough Associate Professor Sophie Chrysostomou of the Department of Computer and Mathematical Sciences.

“We try to shake the stigma attached to studying math that many young women experience in high school,” said Shanks. “The conference is a way to show girls that you can like math and be successful like the women here.”

This is the 15th annual event and since the program began almost 1,500 students have participated in the program. Several Math in Motion alumnae, now studying in university, have gone on to volunteer in consecutive events, sharing their love of STEM subjects with other girls.

“We continue to organize and invite students to this program because there is still work to be done in changing the stereotyping surrounding scientists being involved in STEM programs,” said Chrysostomou.

READ more IN THE TORONTO STAR

According to Statistics Canada, women are always less likely to choose a STEM post-secondary program, regardless of mathematical ability. A recent study by U of T Economics Professor Ismael Mourifié found that even earlier intervention in education might motivate more young girls to not dismiss technical fields of study.

One of the activities, now a Math in Motion tradition, is the Design Challenge. Students worked in teams to create protective casings for eggs that were dropped from the Atrium fourth floor to a target on the ground.  The team that landed the egg closest to the target, without breaking the egg, won the challenge.

Throughout the day sessions were presented by Associate Professor Bianca Schroeder, a U of T Scarborough Sloan Fellow and Canada Research Chair in Data Centre Technologies , U Waterloo Lecturer and Centre for Education in Mathematics and Computing Lead Jen Nelson, Independent Electricity System Operator’s (IESO) Stephanie Aldersley and Bernice Chang, and data scientist Elize Shirdel, who developed and launched the mobile app Datenight Babysitting in 2015.

Students were also encouraged to be part of encouraging communities, a message Trudeau echoed in his message saying girls should “find people that support their academic dreams and to listen to (their) voice.”

“Believe in your dreams because the rest of us are counting on them,” said Trudeau. “All of you are tremendously powerful and our world needs you as leaders.”

After Trudeau’s remarks, Duncan delivered the keynote address saying, “our government is proud to support Math in Motion as a launching point for the dreams of young girls.”

“We are committed to strengthening science in Canada by improving the representation of women in STEM disciplines,” said Duncan. “The young women participating in today’s event fill me with hope that the future of science in Canada will be open, diverse and welcoming to the talents and ambitions of all people.”

Following the address, students got to speak with Duncan and ask questions about her career, educational background and more.

“For students, it’s encouraging to hear from the Minister of Science, a woman, and the most powerful man in the country,” said Chrysostomou. “Their messages show these girls that they have support - they have people encouraging them to go towards with their goals.”

This year’s U of T Scarborough's Math in Motion was sponsored by Toronto Hydro, Canadian Mathematical Society, Google, Scarborough Association of Mathematics Education and the Fields Institute for Research in Mathematical Science. 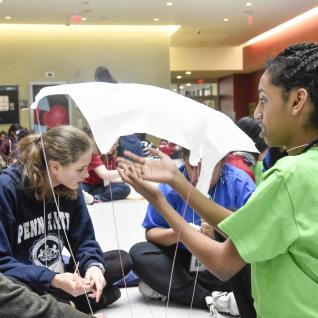 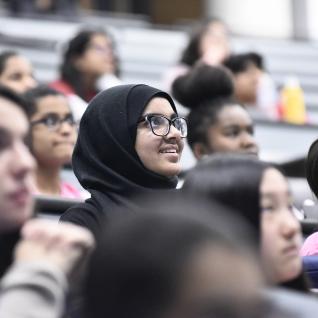 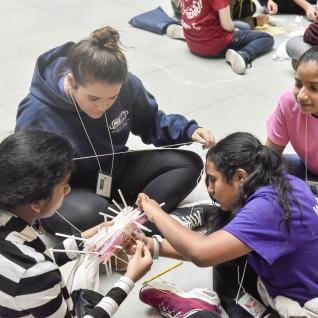 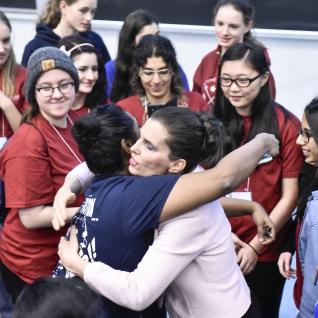 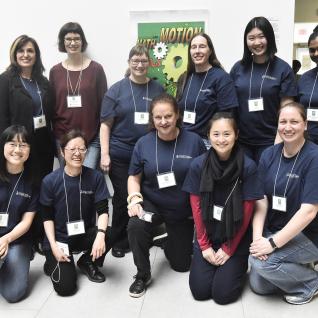 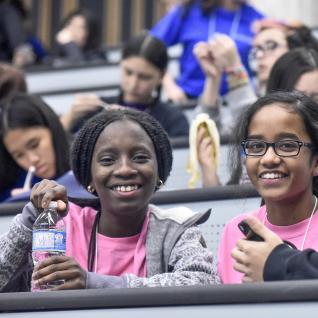 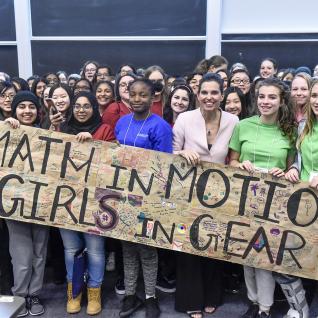