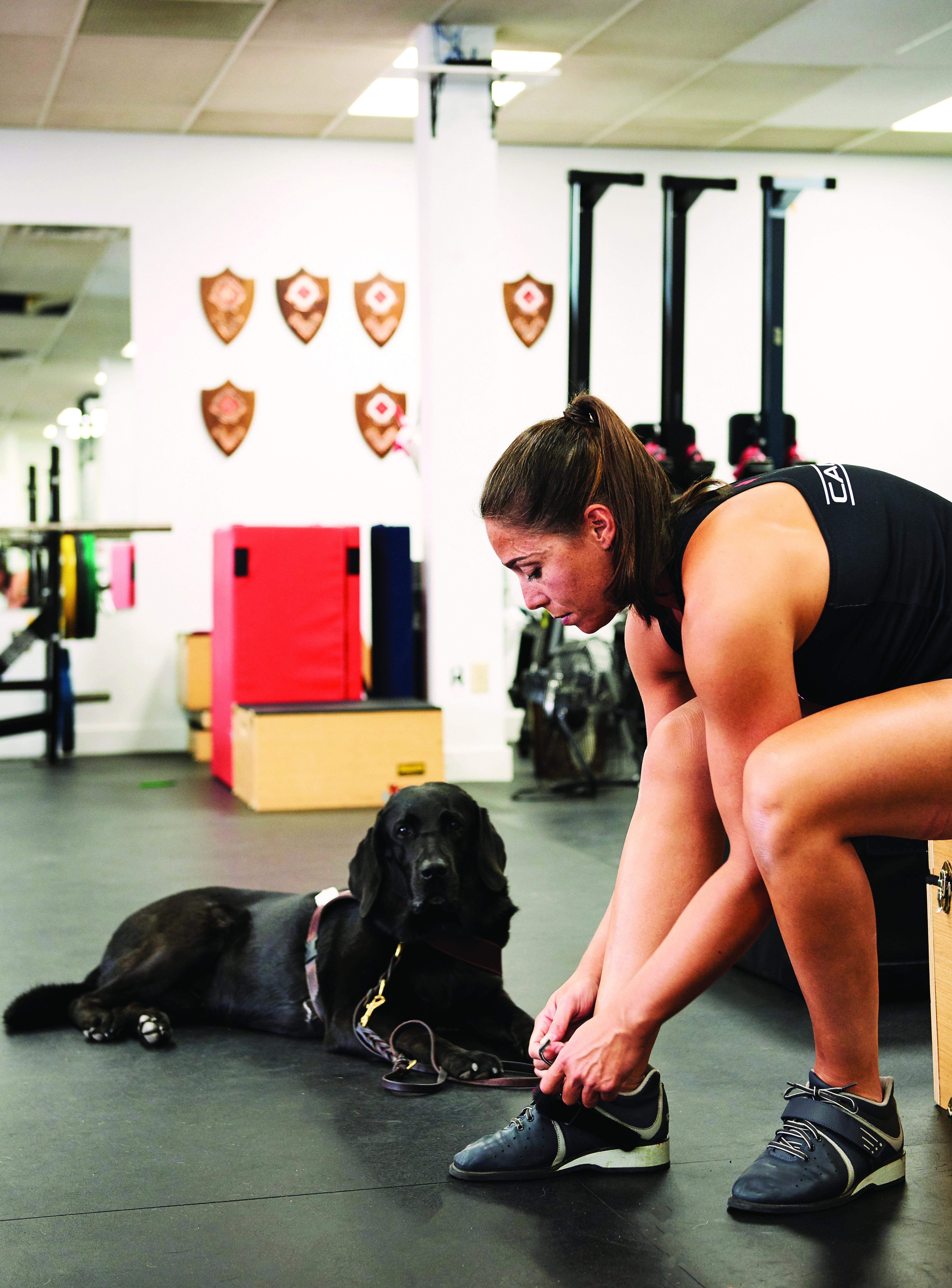 Late last year, Victoria Nolan surprised everyone by announcing her return to Paralympic rowing. The mother of two, television host, author, world champion and three-time Paralympian, who is blind, is used to confounding people’s expectations. “I think it’s kind of a miracle that she’s 45 and she’s competing against people half her age and beating people for spots on the team,” says husband Eamonn Nolan.

Victoria Nolan wasn’t always a rower — or always blind. She was born with a genetic condition called retinitis pigmentosa. But for most of her childhood she could see well, or at least well enough that neither she nor her parents knew anything was wrong. Inspired by her warm and caring Grade 2 teacher, Catherine Gillespie, who “handed out cool stickers,” Nolan decided to become a teacher.

Her first vision loss occurred at age 10, at a school play, when she noticed it was difficult to see in the dark. At 18, she received the retinitis pigmentosa diagnosis, but was determined not to let it hold her back. Nolan attended U of T Scarborough — her first choice because of its reputation in cognitive science. Students explore linguistics, human biology, philosophy, computer science and psychology in this multidisciplinary program, to learn how the human mind represents and processes information. Nolan went on to earn her master’s degree in education at the University of Toronto’s Institute of Child Study. “The cognitive science program was considered an advantage in becoming a primary school teacher,” she says. “It was a really well-rounded program.” With each passing year, Nolan’s vision slowly deteriorated. By the time she graduated, it was hard to take public transit or navigate in a crowded place. But that didn’t stop Nolan from starting a teaching career; she taught Grade 2 and special education. It wasn’t easy, but she developed coping skills. For example, when teaching her students to write, she would ask them to read the punctuation aloud too. When reading aloud to the class, she used a video magnifier to enlarge the text. When teaching gym, she focused on individual drills, which were easier to monitor than group activities.

Retinitis pigmentosa actually refers to a group of rare genetic disorders that cause degeneration of the light-sensitive tissue lining the retina at the back of the eye. Like many genetic disorders, these can be impacted by pregnancy. Nolan had always wanted kids, so she and her husband discussed it and decided to go ahead. “I knew I would be a great mom, and I knew Eamonn would be a great dad,” she says. “If my vision worsened, then it was what was meant to happen. Eventually I was going to lose my sight completely anyway.” With her first child, Tarabh, Nolan’s vision deteriorated to less than five per cent of normal sight. Two years later, with her daughter Ceili’s birth in 2005, it worsened still more. Legal blindness is officially determined when a person has only 10 per cent of 20/20 vision, and Nolan was down to less than three per cent. Only vague shapes in her direct sight line were visible, and they were extremely blurry. The additional vision loss made it harder to get around. It took her a long time to read a single sentence. Teaching was proving impossible without further accommodations and Nolan advocated for several supports. But her school wouldn’t agree to her terms, she says, and it proved exhausting. “I kind of expected people in the field of education to be really open minded and supportive. So it was a real punch in the stomach.”

Unable to work, she became full-time caregiver to her baby and three-year-old. Hardly able to see at all, she would panic if they moved out of her narrow line of sight. She suffered frequent cuts and bruises, falling down stairs and banging into furniture. Afraid to go shopping or to the park, she didn’t want to leave the house. She became isolated and lonely. “I had these plans of being an amazing educator who would achieve all these great things, and there wasn’t that to look forward to anymore. I felt like a failure, that it was hopeless. I fell into a depression.” “It was a really bleak time,” says her husband. “She hit a kind of emotional rock bottom.”

In theory, the blind are protected by several laws. The Canadian Human Rights Act prohibits discrimination based on any form of disability, and the Canadian Charter of Rights and Freedoms guarantees those with disabilities equal benefits and protection under the law. In 1970, Ontario was the first province to pass a law guaranteeing blind persons the legal right to be accompanied by a guide dog in all public places. (It also prohibits any fees for the dog’s presence.) A common perception is that workplaces, businesses and services can’t possibly comply with the laws because it would be too expensive. The facts don’t bear this out, Nolan says. In the U.S., the President’s Committee on Employment of People with Disabilities has  concluded that 15 per cent of accommodations for disabled workers cost nothing, and more than half (51 per cent) of the rest cost less than $500 ($650 CAD). Many accommodations are simple and easy to implement. For example, a stairwell can be made safer for the legally blind and partially sighted by adding coloured tape to the tread’s edges, to prevent tripping. But most places in Ontario and the rest of Canada have yet to do this.

“Blindness is less about the physical realities and more about the emotional isolation and alienation that comes from being disconnected from the world around you,”

“Blindness is less about the physical realities and more about the emotional isolation and alienation that comes from being disconnected from the world around you,” Eamonn Nolan explains. The difference between what is legal and how life for a blind person is lived is stark, says Diane Bergeron, vice president of engagement and international affairs with the CNIB Foundation (formerly the Canadian National Institute for the Blind). She says most people aren’t aware of the laws that prohibit discrimination against the blind, and often can’t put themselves in a blind person’s shoes. “People often don’t understand the actual function of a guide dog. They believe it's only a pet, and as blind people, that we're trying to get our pets into a place they're not allowed.”

Rowing is one place — and of the few sports — where blindness might just have its advantages. To row well, one must tune in to the body’s other senses. The right rhythm is found by listening to the blades as they pierce the water; feeling the flow of water underneath the boat’s hull; and sensing the momentum of one’s teammates. Sight can be a distraction, drawing your attention to the wrong things, such as your competitors or the finish line. During practice, many competitive teams use blindfolding to sharpen the trust in one’s body and non-visual senses. This popular exercise is called "Eyes-Closed Rowing Drill."

“We train really hard,” says Meghan Montgomery, a former teammate of Nolan’s. In 2010, they were together on the team that won gold at the World Championships in New Zealand. Montgomery, who now works as a teacher in Shawnigan Lake, British Columbia, says rowing requires extreme cardiovascular fitness, and also incredible strength. “People often liken it to cross-country skiing or cycling, but it’s more intense than that because it uses the whole body. With Vicky, she’s strong in the weight room. She works hard on her cardiovascular; she’s always pushing herself. And those are the things you need to do to be successful in rowing.”

Nolan has always been athletic. Before becoming completely blind, she ran long distance. She also tried volleyball and salsa dancing, but her vision loss made these more difficult; she would misjudge distance or trip. She was always strong and disciplined. When she started to train and compete as a rower at age 31, scouts at Team Canada took notice of her race times and natural ability.

“Once I got onto the water,” she says, “the feeling of being able to move fast without worrying about tripping or bumping into anything was like freedom.”

Rowing has given Nolan purpose, but discrimination remains a big part of her life. Her guide dog, Alan, allows her to get around safely. But, accompanied by Alan, she has been refused service countless times by taxi and Uber drivers, hotels, hospitals and medical clinics. In 2008, she sued four hotels in Miami for refusing lodging to her and the dog during a training trip with the Canadian national team. When she won, she donated the money to the Fidelco Guide Dog Foundation. If you google Victoria Nolan, you’ll find countless articles about her speaking out against incidents of discrimination. Once, she and her guide dog were refused entry to a radio station. She was there to be interviewed for a story about what it’s like to be refused service because of a guide dog. “We need more education and awareness,” Nolan says. “And for people to realize we're just normal people. You don't need to be afraid, right? Like, it doesn't have to be a big scary thing.”

Diane Bergeron has known Nolan for seven years, and has watched her become highly skilled at using her platform effectively. “She works with the media to try and get the word out about the importance of guide dogs and the abilities of people who have had sight loss,” Bergeron says. “Her experiences and the fact that she's a Paralympic rower demonstrate that a blind person can do sometimes a little bit more than what a lot of sighted people can do.”

Nolan’s platform and advocacy have grown with her World Championship and Paralympic wins. She was part of the first Canadian Paralympic rowing team. She competed at the Beijing, London and Rio Paralympic Games, where she won a bronze medal. At World Championship level, she has won two bronzes, a silver and a gold medal. In 2010, she was part of the team that broke a world record. Her experiences as a top athlete are recorded in her memoir, Beyond Vision: The Story of a Blind Rower, published in 2014.

Today, at the CNIB Foundation, Nolan works to help people navigate the legal process when they face any form of discrimination. She gives keynotes on these issues to government organizations, schools and banks and other companies. On her weekly television show, AMI This Week, on Accessible Media, she talks about how to live a successful life as a blind person and move beyond what others think of you. Although Nolan officially retired from rowing in 2016, she has decided to return to help the team qualify for the Tokyo 2020 Olympics. She believes her experiences of competing and winning at an international level will give depth and strength to the team and help develop the next generation of Canadian rowers.

“I’ve learned to face my disability and refuse to let it dictate how I’m going to live my life. Every time you overcome something that you’re afraid of, it makes you a little bit stronger. And that gives me strength.”

Creative Righting: English department prioritizes inclusion it all its programs